The number “969”, are seen everywhere in the nation's streets: on motor taxis, shop windows, betel nut carts. In a country keen on numerology, 969 officially presents itself as a return to Buddhist roots and the teachings of the faith's founder. 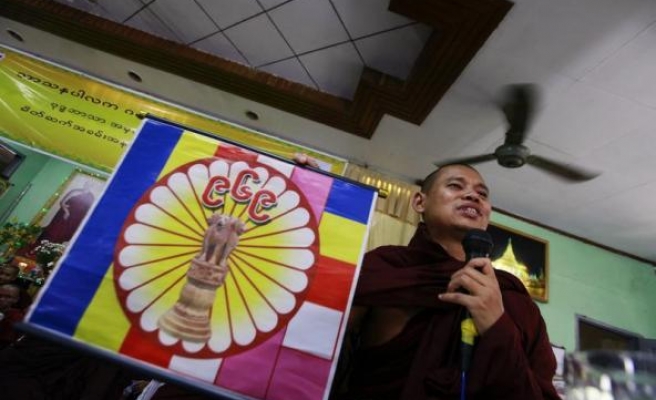 Myanmar is home to a growing wave of anti-Muslim sentiment, as seen in the troubling 969 movement. The numerical significance of the digits is rooted in Buddhism’s Three Jewels (Tiratana), which comprise 24 attributes: nine special attributes of Lord Buddha, six core Buddhist teachings, and nine attributes of monkhood, reported the Diplomat.

Coopted by members of Myanmar’s nationalistic Buddhist majority, the number has become a symbol of religious division that has led to both discrimination and violence. Even the government, under President Thein Sein, has taken controversial actions that seem to align with its anti-Muslim stance, from its ongoing purge of the nation's Muslim minority Rohingyas to its highly contentious two-child policy, applied solely to the same group.

While the movement has infiltrated the country’s mainstream over a long period of time, a prominent Buddhist monk, Ashin Wirathu, has recently become its unofficial leader.

Wirathu is welcomed by supporters at his monastery in Mandalay. Since publicly promoting the 969 movement on social networks, he is often referred to as the “Burmese Bin Laden”. The number “969”, are seen everywhere in the nation's streets: on motor taxis, shop windows, betel nut carts. In a country keen on numerology, 969 officially presents itself as a return to Buddhist roots and the teachings of the faith's founder. However, it is widely accused of being a vehicle of religious hatred and extremist brainwashing.

“If Myanmar wants to live in peace, Buddhists and Muslims have to live separately”, Wirathu told The Diplomat.

The Diplomat correspondent met Wirathu, the saffron robed monk, while he was supervising an exam where he teaches at Masoeyein Monastery in the nation's ancient capital of Mandalay.

The walls of his office are plastered with giant portraits of himself. Outside, plastic banners display the charred bodies of Buddhist casualties in southern Thailand (a region struggling with an Islamist insurgency) and in Myanmar's western Rakhine state (where the Muslim Rohingya minority is enduring a de facto ethnic cleansing).

The infamous monk looks much younger than his 46 years. In his soft and calm voice, he said: “Muslims are fundamentally bad. Mohammed allows them to kill any creature. Islam is a religion of thieves, they do not want peace.”

His racist rants are widely spread on YouTube and social media websites where they are watched by thousands. In 2003, Wirathu was sentenced to 25 years in jail for inciting anti‐Muslim hatred. He was released in 2010 following a general amnesty of political prisoners. With the landmark political reforms implemented by the semi-civilian government that has been in power since March 2011, he is now free to move, speak, and even hold rallies.