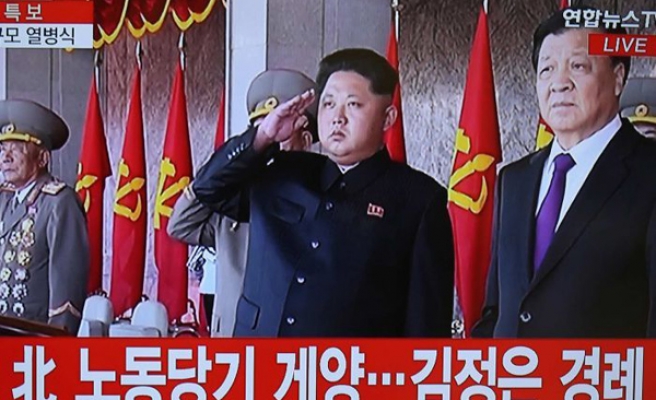 North Korea looked to ratchet up already elevated tensions on the Korean peninsula still further Thursday, firing a pair of short-range missiles and announcing the liquidation of all remaining South Korean assets on its territory.

The moves were a direct response to unilateral sanctions announced by South Korea on Tuesday to punish the North for its January nuclear test and last month's long-range rocket launch.

Military tensions have been on the rise ever since the January test -- the fourth nuclear device North Korea has detonated in defiance of UN resolutions.

The UN Security Council responded with tough, new sanctions, which Pyongyang condemned as a "gangster-like" provocation orchestrated by the United States.

The North also reacted furiously to the start earlier this week of large-scale South Korea-US military drills, threatening pre-emptive nuclear strikes against both Seoul and the US mainland.

"We will completely liquidate all assets of South Korean firms and related institutions left behind in our region," the Committee for the Peaceful Reunification of Korea said in statement carried by the North's official KCNA news agency.

"Frullifom this time on, we nullify all agreements adopted by North and South Korea on economic cooperation and exchange programmes," the committee said.

It also warned of other unspecified "special measures" -- political, military and economic -- it would take against the South in the future.

South Korea announced the suspension of operations at the Seoul-funded Kaesong industrial complex last month, saying that money Pyongyang made from the venture was going towards its nuclear weapons programme.

The shock announcement prompted the North to expel all South Koreans from the estate and freeze all assets there, shutting down the last symbol of cross-border economic cooperation.

An association representing the 120 firms operating factories in Kaesong, which lies just across the North Korean border, estimated the value of the assets left behind at 820 billion won ($663 million).

The head of the association, Jeong Gi-Seob, described the liquidation order as "outrageous".

"No one can liquidate private assets unilaterally. I appeal to both the South and the North to consider the companies' interests and allow us to come to the North and wrap things up," Jeong told AFP.

Mount Kumgang was the first major inter-Korean cooperation project, and thousands of South Koreans visited the Seoul-funded resort between 1998 and 2008.

The South suspended the tours in 2008 after a North Korean soldier shot dead a female tourist from the South who strayed into a restricted zone.

In response, the North scrapped a deal with the resort's developer -- Seoul's Hyundai Asan company -- and seized its properties there.

With the exception of Kaesong, economic cooperation between North and South effectively ended in 2010 after a South Korean naval corvette was sunk by what Seoul said was a North Korean submarine.

Consequently, any economic "sanctions" imposed by either side on the other are more symbolic than damaging.

Earlier Thursday, the North fired a pair of short-range ballistic missiles into the sea off its eastern coast.

Short-range missile launches are a regular and relatively low-level item on North Korea's long list of provocative gestures, and one it often employs to register annoyance.

It fired six high-calibre rockets into the sea a week ago just hours after the UN Security Council adopted its new sanctions package, which included the toughest measures imposed on Pyongyang to date over its nuclear weapons programme.

The package broke new ground by sanctioning specific sectors key to the North Korean economy -- such as mineral exports -- and seeking to undermine the North's use of, and access to, international transport systems.