Today, the Aral Sea has shrunk by 90 percent, making way for Aralkum, the youngest desert of the world. 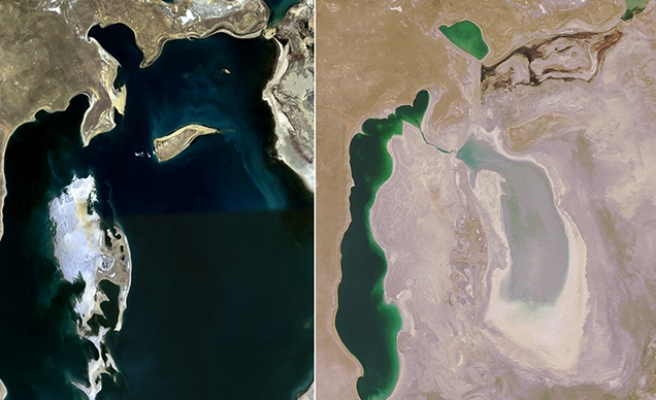 The fourth biggest lake in the world, the Aral Sea - which was once the size of Ireland - has dried up by 90 percent in the last 50 years and left behind a desert.

Divided between western Uzbekistan and Kazakhstan, the Aral Sea began shrinking in the 1960s, following a massive diversion of water for agriculture use from the two main rivers that fed it.

Historians say that Soviet projects to irrigate vast areas of Central Asia, mostly for cotton farming, were part of a Communist doctrine of "conquering" nature and bending its rules to the needs of the future utopia.

Collective farms striving to boost cotton production used up huge amounts of fresh water in their irrigation systems, leading to the Aral Sea shrinking significantly by the 1970s, according to Soviet-era reports.

The limited amount of water which reached the sea was filled with agricultural chemicals and pesticides.

Today, the Aral Sea has shrunk by 90 percent. The area of the lake covers 12,100 square meters , while its water volume is 110 cubic kilometers, with its deepest point being 24 meters.

However, these figures were respectively 68,900 square meters, 1,083 cubic kilometers, and 68 meters in 1960. In 1990 the sea split into a large southern Uzbek part and a smaller Kazakh portion.

In the end, Aralkum, the youngest desert of the world, has emerged. Almost 100 million tons of salty sand has caused an environmental disaster, leading to the emergence of several diseases, as well as increasinng infant mortality in the area.

The sea's northern section, which lies in Kazakhstan and is known as the Small Aral, has been surrounded by an artificial dam built with World Bank funds in 2005 and is now recovering, and the residents of some fishing villages abandoned decades ago have now returned.

However, the two southern parts are now filled with extremely salty water whose only inhabitants are tiny crustaceans and bacteria.

As a result of the sea’s desiccation, sizeable areas of arable land in parts of Uzbekistan, Kazakhstan and Turkmenistan are now covered with toxic salt, poisoning the soil and causing health problems such as cancer, tuberculosis and anemia.

A gargantuan plan to supply the evaporating sea with water from Siberian rivers was abandoned in the 1980s due to high costs and unpredictable environmental consequences.

Philip Micklin, an Aral Sea expert from Western Michigan University told NASA’s Earth Observatory, which captured fresh satellite images of the lake, “This is the first time the eastern basin has completely dried in modern times.”

“And it is likely the first time it has completely dried in 600 years, since Medieval desiccation [drying out] associated with diversion of Amu Darya to the Caspian Sea,” he added.

“This part of the Aral Sea is showing major year-to-year variations that are dependent on flow of Amu Darya. I would expect this pattern to continue for some time,” said Micklin.

The 60 million people living around the Aral Sea are some of the poorest in the region and struggle with declining fresh water supplies and fish stocks, pollution and violent sand storms.

In 2010, U.N. Secretary-General Ban Ki-moon called on Central Asian states to work together to tackle the disastrous effects of the shrinking Aral Sea.