A brief statement from the presidential palace said the helicopter had crashed in central Maidan Wardak province, just to the west of the capital, Kabul. 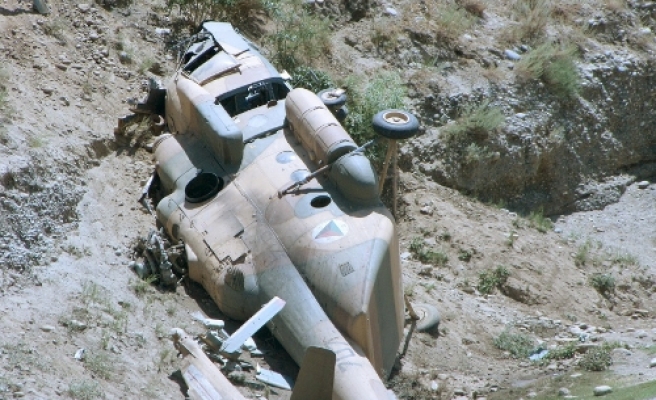 A brief statement from the presidential palace said the helicopter had crashed in central Maidan Wardak province, just to the west of the capital, Kabul, and identified the Americans as special forces troops.

Afghan President Hamid Karzai "shared his deep sorrow and sadness" with U.S. counterpart Barack Obama and the families of the U.S. and Afghan victims, the statement said.

The Taliban claimed to have shot down the troop-carrying Chinook helicopter during a firefight and killed 38 soldiers.

The high casualties come only two weeks after the start of a gradual process of handing security responsibility from foreign forces to Afghan troops and police, and at a time of growing unease about the increasingly unpopular and costly war.

That process is due to end with all foreign combat troops leaving Afghanistan by the end of 2014, but some U.S. lawmakers have already questioned whether that handover is fast enough.

Incidents with heavy death tolls are sure to raise even more questions about the transition process and how much longer foreign troops should stay.

The crash in Maidan Wardak means that at least 374 foreign troops have been killed so far in 2011, more than two-thirds of them American, according to independent monitor www.icasualties.com and figures kept by Reuters.

Neither ISAF nor the U.S. military in Afghanistan confirmed whether there had been any casualties in the crash despite repeated telephone calls, much less any nationalities that might have been involved.

The majority of foreign troops in Wardak, which comes under ISAF's eastern regional command, are American.

Despite the alarming military toll, ordinary Afghan civilians have continued to bear the brunt of the war, with civilian casualties also hitting record levels in the first six months of this year, according to U.N. figures.

ISAF confirmed there had been an air strike in Helmand's Nad Ali district and said it was investigating whether civilians had been present at the time.

The victims of Friday's air strike in Helmand were members of a family that had fled fighting in neighbouring Uruzgan province, police said.

The most contentious of the first seven areas to be handed over was the Helmand provincial capital of Lashkar Gah.