Tensions over new constitution boil over as nationwide stoppage hits schools and transportation. 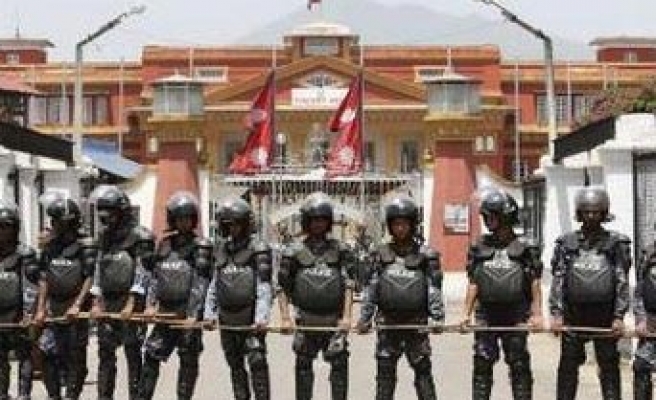 Nepal’s opposition lawmakers threw chairs and smashed microphones in parliament early Tuesday morning as the country headed into another general strike organized to prevent the government from pushing through a new constitution.

The opposition lawmakers’ outburst came as Subash Chandra Nembang, the parliamentary speaker, proposed forming a committee to begin the voting process on contentious issues to meet Thursday’s deadline to enact a new constitution.

Photos of the scuffle have been widely circulated and have drawn condemnation. Four security officers were also injured in the fracas.

Shops, schools and transportation were disrupted across Nepal on Tuesday due to the general strike called by an alliance of 30 opposition parties, including the Maoists.

The leftists are the third-largest party in Nepal having given up an armed insurgency and entered the political mainstream in 2006.

Around two dozen protesters have been arrested across the country for vandalizing vehicles, including motorbikes and taxis, according to Madhav Joshi, a spokesman for the Nepalese police.

Demonstrators shouted slogans and marched through the streets of Kathmandu, the capital, but there also reports of counter-protests.

Nepal police confirmed only one incident of counter-protest in the southwestern district of Kailali, but News24 Television showed dozens of young men and women, their faces covered with black cloth and carrying the national flag, gathered in the Maitighar neighborhood of Kathmandu against the general strike.

Agni Sapkota, a Maoist leader, said his fellow lawmakers resorted to violence after the leaders of the ruling parties ignored their demand for agreement before the meeting in  parliament.

“The ruling parties made mistakes. So we had to engage in such acts to defend our position,” he told a local television channel on Tuesday.

Nepal’s political parties had set Thursday’s deadline to deliver a post-war constitution after the end of a decade-long Maoist insurgency which claimed lives of 16,000 people.

Despite several extensions to its deadline, the first constituent assembly, elected in 2008, dissolved in May 2012 after it failed to deliver the charter.

At the heart of the dispute was the issue of how to restructure the Himalayan nation into several self-governing federal states. The Maoists, who were the largest force in the first assembly and championed the states along ethnic lines, were routed in polls held in November 2013, which dealt a blow to their position in the parliament.

Through the polls, the Nepali Congress and the UML, which ruled the country when the Maoists waged the insurrection, emerged as the largest and second largest parties, forcing the former rebels to the opposition benches.

Sushil Koirala, who heads the coalition government of the NC and UML, came to power in February last year, pledging to deliver a constitution within a year. However, the deepening polarization has resulted in political instability and unrest in the country.