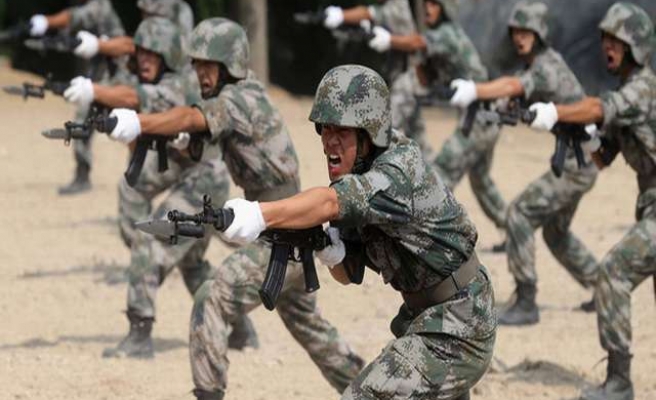 China is close to approving a law that will create a legal framework for sending troops abroad on counter-terrorism missions, as Beijing seeks to address the vulnerability of the country's growing global commercial and diplomatic interests.

Experts said Article 76 of the draft anti-terrorism law would allay concerns among the military elite about the lack of a formal mechanism for carrying out such operations, as well as mark a shift in foreign policy thinking and military doctrine.

The article is a small part of a draft law chiefly aimed at "combating terrorism at home" that was made public in November. It has undergone a second review by a parliamentary committee, and is likely to be adopted in the coming weeks or months.

China has rarely been the target of terrorist acts overseas but it has vast energy interests, construction projects and mines in unstable parts of the world, including the Middle East and Africa.

The risk to those projects was highlighted in 2011 when the government evacuated thousands of Chinese workers from Libya during the uprising against Muammar Gaddafi. Some Chinese operations have also generated local hostility over issues such as the use of imported Chinese labour and the exploitation of natural resources.

Article 76 would authorise the military, as well as state and public security personnel, to conduct counterterrorism operations abroad with the approval of the "relevant country".

While the draft gives few details, experts said the law could initially allow military or state security counter-terrorism experts to work abroad either as part of actual investigations or in a training capacity.

"It shows a legitimate evolution in Chinese thinking on counterterrorism efforts," said Daveed Gartenstein-Ross, a senior fellow who researches counterterrorism at the Foundation for Defense of Democracies in Washington.

"Whether the law allows for cross-border counterterrorism missions is sure to have an impact on military preparations and, ultimately, doctrine."

Security operations by China abroad are not unprecedented. China sent gunboats down the Mekong River in cooperation with Thailand, Myanmar and Laos in 2011 to combat drug running in the Golden Triangle while its navy has conducted numerous anti-piracy patrols off the Horn ofAfrica.

Shen Dingli, a security expert at Shanghai's Fudan University, said the law was also intended to quell any concerns that China would take unilateral military action as its global security footprint expands.

"Having a law shows we want to address other's concerns. There is fear that if (cross-border security operations) become more frequent, other countries will worry," Shen said.

Chinese lawmakers will primarily focus on the legal definition for terrorism. Unlike the first draft discussed last year, the one to be reviewed on Thursday interprets terrorism as “any speech or activity that, by means of violence, sabotages or threats, generates social panic, undermines public security, or menaces government organs or international organizations”. The first draft also included “thoughts” in addition to “speeches and activities," which was considered to violate the constitutional rights of Chinese people.

Also, the draft offers improved aerospace controls to protect the country against potential drone attacks and proposes to tighten control on social media to regulate the spread of terror-related information.

One of the law's key statutes paves the way for China to create a domestic body that would have the power to designate organisations and their members as terrorists without due process, a measure condemned by human rights groups.

Beijing has also expressed concern that Chinese militants are travelling to battlefields in Syria and in Iraq, where China has significant oil interests.

The government has been vague, however, about how it might seek to cooperate with countries such as the United States to counter extremists groups, including Islamic State.

In a brief statement in response to questions from Reuters, the Defense Ministry said the Chinese military "shoulders counterterrorism duties, and consistently and proactively participates in international counterterrorism cooperation".

An editorial in the military-run China National Defense Daily this month said "giving the military the legal power" to conduct operations abroad was a prerequisite to deal with terrorism.

"In confronting the threat of terrorism, which is becoming more rampant by the day, the world's principle countries all gradually recognise that there is no substitute for the special role of the military," the paper said.

Indeed, China's military has already ramped up exercises with other countries in recent years, with counterterrorism activities central to such drills.

"I would argue (the law) is part of a growing normalisation of China's general approach to counterterrorism practices and foreign policy," said Raffaello Pantucci, director of International Security Studies at the Royal United Services Institute in London.

"Even if you don't see increased Chinese military activity over the next decade or so, the Chinese at least want to give themselves the authority and the flexibility to do it," Yung said.