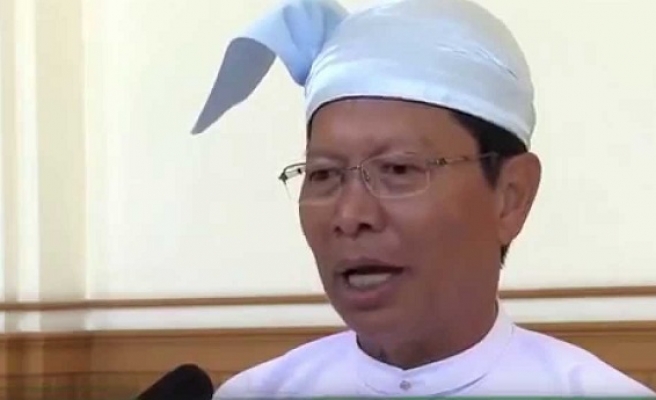 Muslim officials in Myanmar jumped to the defense of Aung San Suu Kyi's government on Sunday after its new religious affairs minister appeared to make comments detrimental to the country's Muslims.

The National League for Democracy (NLD) only took power Friday after a landslide win in December elections. Many international observers hope the change in rule will lead to positive steps to improve the plight of the country's religious minorities, in particular its persecuted Muslim Rohingya ethnicity.

In an interview with Voice of America radio on Saturday evening, Religious Affairs and Culture Minister Thura Aung Ko said Islam in Myanmar is “a religion by the minority associate citizens” who acquired citizenship through the 1948 Union Citizenship Law.

He went on to say that Buddhists were full citizens, and described Christianity as the country's minority ethnic group.

Buddhist nationalist have long used such allegations to suggest that Rohingya are not the Myanmar citizens they claim to be, instead interlopers from neighboring countries who have no right to be in Myanmar.

Many Myanmar nationalists refuse to even recognise the term "Rohingya", instead referring to the ethnic group as "Bengali" which suggests they are from Bangladesh.

In the interview, Thura Aung Ko -- who served as deputy religious affairs minister under the former military junta -- added that the religions of minority groups were not suppressed in the country -- as human rights groups have claimed -- but admitted that Buddhism was the country’s favored religion.

On Sunday, the London-based Burmese Muslim Association issued a statement strongly objecting to what it called "the irresponsible comments of Thura U Aung Ko”.

“Islam is stated as a religion of full citizenship [descendants of residents who lived in Burma prior to 1823, or were born to parents who were citizens at the time of birth] in three constitutions of the country drafted in 1947, 1974 and 2008," it said.

"The Islam religion had arrived in Myanmar since before Bagan era [AD 652-660],” it underlined

However, talking to Anadolu Agency on Sunday an official at the Yangon-based Islamic Religious Affairs Council for Myanmar (IRACM) said that they suspect the minister was misquoted.

“We don’t think the NLD has such discriminatory policy to minority groups. We feel sad for his comment, but still believe he made the comment unintentionally,” the man -- who did not wish to be named as he was not the IRACM's official spokesperson  --  told Anadolu Agency by phone.

“We believe he is fair, and can work to bring religious harmony back,” he added.

Other Muslim organizations in Yangon contacted by Anadolu Agency on Sunday refused to comment, but agreed that the comment had been unintentional.

Analysts have said that the incident once again illustrates the pressure that the NLD is under to solve religious discrimination, while at the same time acting without offending Buddhist hardline groups such as Ma Ba Tha (the Race and Religion Protection Organization) which hold tremendous political sway.

Ma Ba Tha was formed after communal violence between ethnic Rakhine Buddhists and Rohingya Muslims in 2013 left 57 Muslims and 31 Buddhists dead, around 100,000 people displaced in camps and more than 2,500 houses burned -- most of which belonged to Rohingya.

The organization has a focus on what one of the group's monks has called the Islamic "invasion" of Myanmar, and is responsible for a series of laws seen as designed to stop Muslims having multiple wives, large families and marrying Buddhist women.

It draws its support from the country's uneducated Buddhist masses, and has rapidly become one of the country's most powerful religious organizations.

Last week, international media reported that the NLD leader had lost her cool following a tense Oct. 24  2013 interview with BBC presenter Mishal Husain, in which she was heard to mutter "no one told me I was going to be interviewed by a Muslim".

The incident is reported in a recently released novel by Peter Popham to have happened while the 1993 Nobel Prize for Peace winner was being challenged on alleged anti-Islamic attitudes in the country, and violence towards Muslims.

Popham is the author of a previous autobiography about Aung San Suu Kyi titled “The Lady and the Peacock”.

Analysts have pointed out that the comment may not necessarily have been anti-Islamic, but rather a sign of frustration by Suu kyi with her advisors for an apparent failure to brief her on the religion of her interviewer, which would have been a hint to the line in questioning on what continues to be a highly sensitive issue in Myanmar.

Saturday's interview -- in which the controversial comments were made -- was, however, preceded by an announcement that suggested that the NLD may be making its first steps to tame unruly monks.

Earlier in the day, Thura Aung Ko's ministry of Religious affairs and Culture announced that monks and novices who breach laws and orders would be brought to the civil court and punished accordingly.