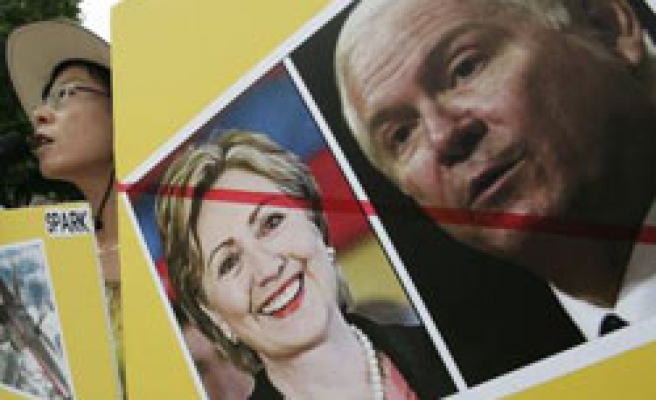 Clinton made the announcement at the end of an unprecedented meeting together with Defense Secretary Robert Gates and South Korea's defence and foreign ministers to formulate a response to the sinking of a South Korean navy ship in March.

She insisted the additional sanctions were not aimed at ordinary North Koreans.

"They are directed at the destabilising, illicit and provocative policies pursued by that government."

"Today, I am announcing a series of measures to increase our ability to prevent North Korea's proliferation, to halt the illicit activities that help fund its weapons programmes, and to discourage further provocative activities.

"We will adopt and begin implementing new, country-specific sanctions aimed specifically at North Korea's sale or procurement of arms and related materiel and procurement of luxury goods, as well as other illicit activities.

Clinton and US Defense Secretary Robert Gates travelled to South Korea in a show of solidarity after the sinking of the ship, which left 46 dead.

The US and South Korea accuse the North of torpedoing the Cheonan near the disputed Yellow Sea border in March -- a charge it denies.

"There has been some indication over the last number of months, that as the succession process gets under way in the North, that there might be provocations particularly since the sinking of the Cheonan," Gates said.

"So I think it is something that we have to look at very closely, we have to keep in mind and be very vigilant."

Ailing leader Kim Jong-Il, 68, is widely reported to be preparing to name his youngest son as eventual successor.

Gates and his South Korean counterpart Kim Tae-Young Tuesday announced a major joint naval exercise starting this Sunday to send a "clear message" to the North.

The South's defence ministry said it would be the first in a series of about 10 joint naval drills in coming months. Gates defended the exercises as important to show "determination not to be intimidated".

But China repeated its concerns over the wargames, saying the large-scale exercises would aggravate tensions in the region.

In a joint statement they warned the North of "serious consequences" for future aggression and urged the secretive state to admit it torpedoed the Cheonan.

The sanctions are aimed at stopping the North's buying and selling of weapons, as well as the purchase of luxury goods and other illicit activities.

Clinton said the sanctions were drafted partly based on financial measures taken "several years ago" that she said had proved successful at the time. She appeared to be referring to previous sanctions against a bank in Macau that Washington alleged Pyongyang used for money laundering.

Clinton said the Obama administration continued "to send a message to the North that there is another way", referring to US pledges of major aid if Pyongyang cancels its nuclear programme.

Clinton and Gates also paid a joint visit to the border with the North on Wednesday in a symbolic show of support.

Watched through the window by a curious North Korean soldier, they entered a meeting room straddling the borderline at the border truce village of Panmunjom and briefly set foot on the North's side of the room.