The spew of rocks, fine particles and steam from the snow-capped, 1,978-m (6,490-ft) peak, was caused by a pressure buildup of volcanic gases, volcanologists said, after seismic activity had increased in recent weeks. 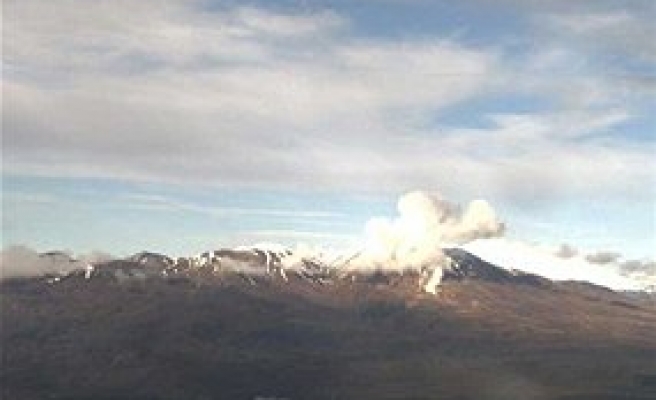 A New Zealand volcano dormant for more than a century has spewed boulders and spread an ash cloud over the centre of the country, disrupting air traffic but causing no other damage or injuries.

Mount Tongariro, one of three volcanic peaks in the central North Island, roared into life late on Monday night, as craters on the mountain located in a national park near popular hot springs, exploded with bright flashes and thunderous booms.

The spew of rocks, fine particles and steam from the snow-capped, 1,978-m (6,490-ft) peak, was caused by a pressure buildup of volcanic gases, volcanologists said, after seismic activity had increased in recent weeks.

Steve Sherburn, volcanologist at New Zealand's Institute of Geological and Nuclear Sciences, said the scale of the eruption was unexpected, as activity at the volcano had been sporadic before Monday's explosion.

"We haven't had any activity for several days so to go from what we had seen to an eruption last night was a little surprising," he said.

A cloud of ash billowed over the central North Island on Tuesday, blanketing the area with a thick, grey carpet of ash.

Flights to and from provincial destinations, including renowned tourist spot Rotorua, were delayed or cancelled on Tuesday, and local highways were closed for a time, but there were no reports of damage or injury.

Meteorologists said the ash cloud was being blown eastwards towards the Pacific Ocean.

The last time Mount Tongariro erupted was in 1897, ending a decades-long period of intermittent activity, and Sherburn said Monday's explosion could be the start of more such activity in the area.

"At the moment we really don't know, it could just be a singular event, or it could be the start of a period similar to what we've seen historically," he said.

Neighbouring Mount Ruapehu is the most active volcano in New Zealand, last erupting in 2007 when it sent a lahar, or mud slide, down the side of the mountain.

Major eruptions in 1995 and 1996 by Ruapehu resulted in widespread flights disruptions and the closure of ski fields on the mountain.