A Pakistani passenger plane crashed in heavy rain near Islamabad on Wednesday, killing all 152 people on board, officials said. 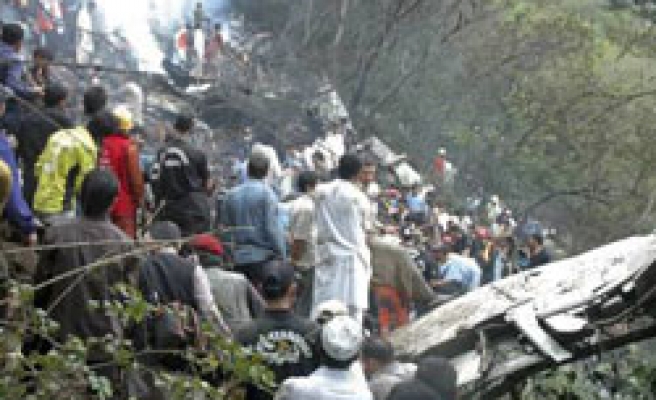 A Pakistani passenger plane crashed in heavy rain near Islamabad on Wednesday, killing all 152 people on board, officials said, in the worst aviation accident in Pakistan.

"There are no survivors. We believe all are dead. We are recovering the remains of the dead bodies from the wreckage," Imtiaz Elahi, chairman of the state-run Capital Development Authority, a city municipal body.

Two Americans were among the victims, a U.S. embassy spokesman told Reuters. He had no further details.

The Airbus 321, belonging to private airline Airblue, crashed into a heavily wooded and hard-to-access hillside while flying from the southern port city of Karachi. More than 90 bodies had been recovered so far, but the bad weather was making recovery efforts difficult.

"We have suspended the air operation because of rain. It will take a long time to clear the area. There's no way to transport bodies from the site except via helicopters and even helicopters cannot land there," said Aamir Ali Ahmed, senior city government official, said.

Rescuers said they had to dig through the rubble with their bare hands, with fire and thick smoke hampering their work. The fire has since been extinguished, but access to the hillside remained limited to pedestrians and helicopters.

"The pilot was given directions to land either on runway I or II," Interior Minister Rehman Malik told reporters. "The plane was at 2,600 feet (792 metres) before landing but suddenly it went to 3,000, which was unexplained."

"If the visibility to the runway was so poor then it should have been diverted."

Defence Minister Ahmed Mukhatar said the control tower at the airport had been sealed and a team would examine the "black box" data recorder and radio traffic between the plane and the tower.

"If you look at the position of the wreckage it's clear that the plane went beyond safety margins. It should have manoeuvred within five miles of the runway but it did not happen," said Ejaz Haroon, managing director of state-run airline PIA.

The crash site is on the Margalla Hills facing Islamabad, about 300 metres (yards) up the side of the hills. Smoke could be seen from some districts of the city after the crash.

While Wednesday's crash is the worst aviation accident on Pakistani soil, PIA has had two worse disasters. In 1979 and 1992, PIA jets crashed in Jeddah, Saudi Arabia and Kathmandu, killing 156 and 167 people, respectively.

Within Pakistan, the last major aviation accident was in 2006 when a PIA plane crashed near the central city of Multan killing 45 people.

The military said it had sent three helicopters to the site and troops had also been moved there. Prime Minister Yusuf Raza Gilani surveyed rescue operations from the air and the government declared Thursday a day of mourning for the victims.

Airblue began operations in 2004 with a fleet of Airbus A320 and A321 aircraft, according to its website www.airblue.com. It flies primarily domestic routes as well as to the United Arab Emirates, Oman and Manchester in Britain.

At Islamabad's international airport in the moments after the crash, passengers in the departure lounge scanned the television screens for news.