Matthew Miller, 25, of Bakersfield, California, had prepared his story in advance and written in a notebook that he was seeking refuge after failing in an attempt to collect information about the U.S. government, state media said. 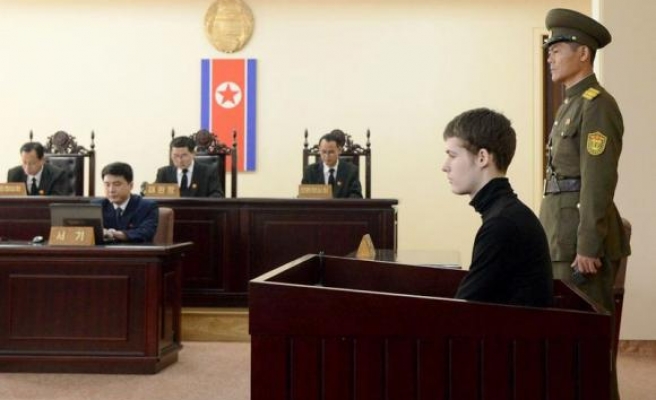 An American recently sentenced to six years hard labour by a North Korean court pretended to have secret U.S. information and was deliberately arrested in a bid to become famous and meet U.S. missionary Kenneth Bae in a North Korean prison, state media said on Saturday.

Matthew Miller, 25, of Bakersfield, California, had prepared his story in advance and written in a notebook that he was seeking refuge after failing in an attempt to collect information about the U.S. government, state media said.

"He perpetrated the above-said acts in the hope of becoming a 'world famous guy' and the 'second Snowden' through intentional hooliganism," KCNA said, referring to former U.S. intelligence contractor Edward Snowden, wanted by the United States for leaking secrets of its surveillance programmes.

"This is an intolerable insult and mockery of the DPRK and he therefore, deserved punishment," KCNA said, using the North's official DPRK acronym.

Miller was arrested when he tore up the tourist visa he used to enter the isolated country in April, state media said at the time. He was sentenced to six years hard labour by a North Korean court last Sunday.

"The results of the investigation made it clear that he did so not because of a simple lack of understanding and psychopathology, but deliberately perpetrated such criminal acts for the purpose of directly going to prison," state media said.

Miller's case was exacerbated by the fact his actions followed "reckless remarks" by U.S. Secretary of State John Kerry that described reclusive North Korea as a "country of evil," state media said.

Kerry in February criticised North Korea as an "evil place" following the publication of an extensive human rights report by United Nations investigators who said North Korean security officials should be tried for crimes related to the systematic starvation, torture and imprisonment of North Koreans.

State media said Miller had deliberately sought his arrest so he could investigate North Korean prison and human rights conditions, and meet with and negotiate the release of U.S. missionary Bae, who is serving a hard labour sentence after being convicted of crimes against the state last year.

Unlike the two other Americans held in Pyongyang, relatively little is known about Miller and his family has not spoken publicly about him.

Reuters reported this week that he spent months in South Korea pretending to be an Englishman named "Preston Somerset" and invested time and money hiring artists to help create his own anime adaption of Alice in Wonderland, the Lewis Carroll fantasy with which he seemed fascinated, according to acquaintances.

He did not seem to have close friends, a regular job or means of support during the months he spent in Seoul over a period of at least two years, they said. He gave no inkling of any interest in nuclear-capable and unpredictable North Korea.

He is one of three U.S. citizens now being held by North Korea. A third American, Jeffrey Fowle, was arrested for leaving a Bible in the toilet of a sailor's club in the port city of Chongjin and is currently awaiting trial.

The United States has said Pyongyang is using its citizens as "pawns" to win a high-level visit from Washington, which has repeatedly offered to send special envoy for North Korean Human Rights Robert King to negotiate the release of Miller, Bae and Fowle.

North Korea has so far rejected those offers.