The foreign ministry spokesman said North Koreans regarded the life of their leader as "more precious" than their own. 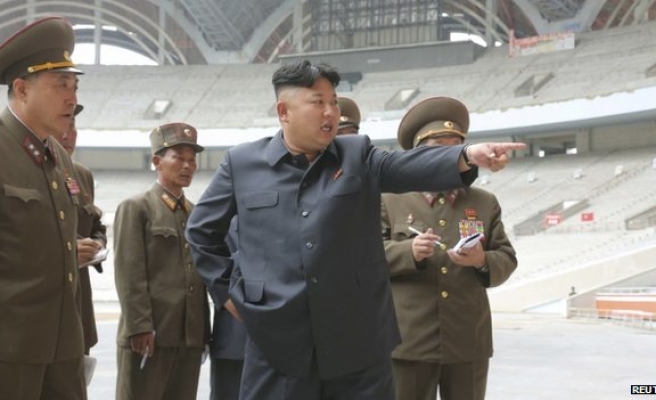 North Korea on Wednesday denounced a forthcoming American comedy film featuring a plot to assassinate its leader Kim Jong Un as an act of terrorism and threatened to unleash a "merciless counter-measure" if Washington failed to ban the movie.

The movie "The Interview", starring Seth Rogen and James Franco, is scheduled for release in Octoberthis fall.

"Making and releasing a movie on a plot to hurt our top-level leadership is the most blatant act of terrorism and war and will absolutely not be tolerated," the North's official KCNA news agency quoted a foreign ministry spokesman as saying.

The Hollywood movie recounts the story of a talk show host and his producer who land a rare sit-down interview with Kim, the third leader of his family dynasty to rule North Korea.

The Central Intelligence Agency then recruits the pair to assassinate him.

Kim, in his early 30s, has shown no sign of easing the iron grip imposed by his grandfather, state founder Kim Il Sung, and his father, Kim Jong Il, who died in 2011. Nor has there been any letup in the personality cult surrounding his leadership.

He has maintained tight control of virtually all aspects of life after ordering the execution of his powerful uncle to crush what was termed an attempt to overthrow the authorities. More than 200,000 people are believed to be held in prison camps, but Pyongyang rejects as "fabrications" details of mass brutality set out in a U.N.-sponsored report citing escapees and exiles.

The foreign ministry spokesman said North Koreans regarded the life of their leader as "more precious" than their own.

"If the U.S. administration allows and defends the showing of the film, a merciless counter-measure will be taken," the unnamed spokesman was quoted as saying.

But Kim is also believed to be a fan of American culture and oversaw the staging of a show featuring popular U.S. folklore.

He was seen giving a thumbs-up to dancing Disney characters and a performance set to the theme song from the film "Rocky".

Former NBA star Dennis Rodman, the most high-profile American to meet Kim, sang "Happy Birthday" to the North Korean leader during his latest visit in January to stage a basketball game.