"The survivors of the war heroes here can beat the Americans to death on our own," said Kim Bu-ok, who fell to her knees in tears when she approached her father's grave. 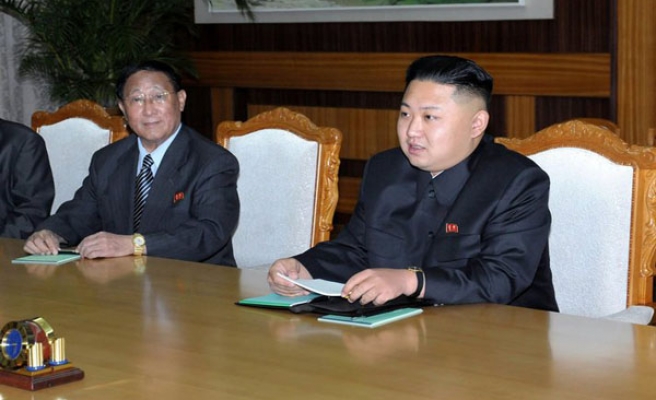 North Korean leader Kim Jong-un presided on Thursday over a commemoration at a war cemetery as the country prepares to mark the 60th anniversary of what is sees as its victory in the Korean War with defiance of old enemy the United States.

Kim, the grandson of North Korea's founding father who launched the Korean War, Kim Il-Sung, did not speak at the ceremony but members of the large crowd who attended poured scorn on their foes.

"The survivors of the war heroes here can beat the Americans to death on our own," said Kim Bu-ok, who fell to her knees in tears when she approached her father's grave.

"We can crush those bastards no matter how hard they try, and I want the world to know this. As soon as those Americans even stick up their heads, we'll stomp them to dust."

North Korea has been staging nationalistic tributes to its "Eternal President", the late Kim Il-Sung, ahead of the anniversary on Saturday of the armistice that ended the 1950-53 war.

North Korea calls July 27 its "Day of Victory in the Great Fatherland Liberation War". It blames the U.S. military presence in the South for confrontation on the peninsula.

Kim Jong-un, who leads the North as first secretary of the Workers' Party, was welcomed at the ceremony with cheers from thousands of people, many of them family members of those buried at the cemetery on the outskirts of Pyongyang.

Banners were strung up with slogans such as "Glory to the warrior heroes who did their part in the liberation of the homeland".

Kim was accompanied by North Korea's power couple: his aunt, Kim Kyong-hui, the 67-year-old daughter of the founding leader, and her husband, Jang Song-thaek, widely considered the second most powerful man in the North and the political mentor to the youthful leader.

It was the mysterious aunt's first public appearance since May. Her absence had fueled speculation in South Korean media that she may be ill, which could have serious implications for Kim Jong-un's grip on power.

Under a sunny sky and in sweltering heat, Kim led a ribbon-cutting ceremony and paid his respects to the dead.

He was flanked by top officials including Premier Pak Pong-ju and a key aide, Choe Ryong-hae, who heads the military's political apparatus.

North Korea has used the anniversary to underscore its defiance of U.N. sanctions, imposed for its nuclear and missile tests, and its resolve in light of a perception of chilling ties with its sole major ally, China.

Despite Chinese frustration with North Korea's threats this year of nuclear war against the United States and South Korea, China is sending its vice president to the armistice anniversary in Pyongyang.

Early on Thursday, groups of adults and school children were preparing for the celebration, practicing choreographed routines with red flags and musical instruments in public areas of the North's capital.

Pyongyang's streets were decorated with national flags and posters as well as slogans trumpeting the North's space technology and nuclear weapons programme.

After decades of stifling central planning and isolation, North Korea struggles to feed its people while capitalist South Korea has become a prosperous economic power.

Another visitor at the cemetery, air force pilot Ryang Chang-hyok, said he had complete confidence in his leaders and was ready to take up the legacy of his father, who flew against U.S. forces in the Vietnam War, if ordered.

"No plane flown by the American or South Korean bastards will enter the skies of the fatherland," Ryang said.