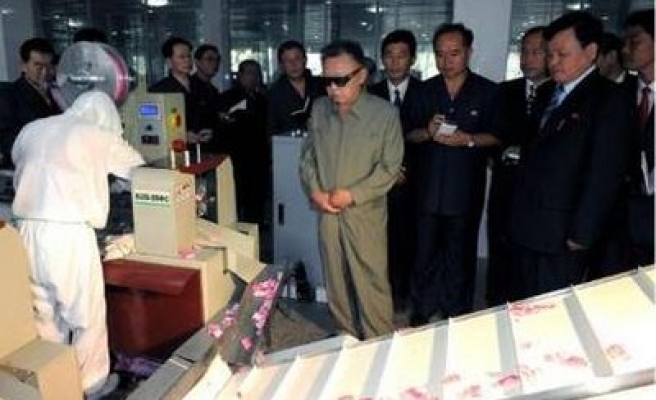 North Korean leader Kim Jong-il is visiting powerful ally China possibly with his son and heir apparent, South Korean government sources said, ahead of a meeting next month that may settle his succession.

The Workers' Party (WPK) is holding a rare meeting in September at which the assembly could set in motion the succession of the leader's son, Kim Jong-un, analysts say.

"Kim Jong-il is travelling through China by train, but we have no information as to whether his son is accompanying him," a presidential source told Reuters.

A South Korean foreign ministry source said there was evidence that both Kim and his son were in China. The South's Yonhap news agency reported that Kim was in Jilin, northeastern China, where he visited a school he attended as a child.

This visit would be the second time since May that Kim has gone to China on which he depends to prop up his country's failing economy.

There is widespread speculation that Kim is in poor health following a suspected stroke in 2008 and some analysts say he may be in a hurry to establish his son's succession to the family dynasty that has ruled North Korea since its founding after World War Two.

Wu Dawei, China's top envoy on stalled North Korean nuclear disarmament talks, told reporters at Seoul's Incheon airport he could not comment on the issue, but hinted at a visit.

"What I would like to stress is that China and North Korea are close neighbors and it is a normal thing for leaders of the two countries to exchange visits frequently," he said, after arriving in South Korea for talks on nuclear disarmament.

A policewoman at the Chinese border town of Ji'an said: "Some leader came yesterday," but declined further comment on reports that the two Kims had travelled there on late on Wednesday.

Cai Jian, an expert on Korea at Fudan University in Shanghai expressed a degree of scepticism over the reported trip.

"North Korea does not need China's blessing or approval for succession plans, but Kim may feel he should inform China of his plans.

"China has made it clear that it is very concerned about maintaining stability and close contacts with North Korea, and it would be concerned to know that any future leader also attaches much importance to relations with China. But this is not about seeking China's agreement, it's about informing China."

Daniel Pinkston, a specialist on Korean affairs in Seoul with the International Crisis Group, said a visit was most likely connected to next month's WPK meeting.

"There is so much circumstantial evidence pointing to the succession issue. And there are other signs that they are hurting for cash aid and assistance. The two things are not mutually exclusive."

The reported visit was taking place a day after former U.S. President Jimmy Carter flew into Pyongyang to win the release of an American jailed in the isolated country.

There has been heightened tensions on the peninsula after the March torpedoing of a South Korean warship, blamed by Seoul on the North. The sinking prompted expanded U.S. sanctions against the North.

Pyongyang, which denies sinking the ship, itself has been pushing the international community to return to talks on ending its nuclear weapons programme in return for massive aid and an end to its international isolation.

China wants Seoul and Washington to put the sinking of the warship behind them, and to restart the stalled six-party talks.

The South's foreign ministry spokesman, Kim Young-sun, told a news conference that North Korea must first take responsibility for the sinking and be willing to denuclearise before Seoul was willing to engage in six-party talks.