OANA President and AA Director General Ozturk expressed concern over recent events in Egypt and Syria, pointing to the damage dealt to journalism on a global scale 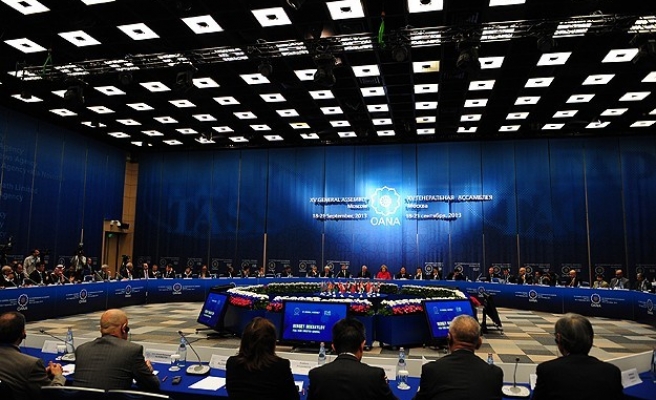 The political turmoil and violence raging in Egypt and Syria are taking a toll on journalists' momentous work to inform the global community, Organization of Asia-Pacific News Agencies (OANA) President and AA Director-General Kemal Ozturk said on Thursday.

OANA, an eponymous network of news agencies in the Asia-Pacific region, is holding its 15th General Assembly from September 18-21 in Moscow, as Turkey's Anadolu Agency is handing over the term presidency it has held since 2010 to the Russia's Itar-Tass news agency.

"I would like to state to distinguished OANA members that, as news agencies, we should act in line with our historical responsibility, let our humanitarian conscience be our guide to promote the availability of news information to the people of the world," Ozturk said.

He said the situation in Egypt after the military coup and in Syria with its 2.5-year civil war were dangerous for the work of journalists on whom the world relies in order to be informed of large-scale events with far-reaching implications.

"The coup government (in Egypt) killed its own defenseless people, arrested international media serving in Egypt, shut down offices of news agencies and prevented media agencies from doing their jobs. All these developments in Egypt were disregarded again by the international media which ignored international journalism standards. In the Syrian civil war, a number of journalists were killed or wounded. We wish the Syrian civil war will come to an end as soon as possible," Ozturk said.

Valentina Matviyenko, the highest profile female politician in Russia and the head of its parliament's upper house, said Russia was undertaking immense efforts to ensure the crisis in Syria was solved through peaceful means.

"Russia's proposal on placing Syria's chemical weapons under international control is a great opportunity to pave the way for a political solution to the crisis," she said in her remarks at the OANA General Assembly.

Matviyenko noted that Moscow was opposed to a possible military strike in Syria, adding that the BRIC (Brazil, Russia, India, China, and South Africa) which had gathered at the G20 summit last week also took a stance against the military option.