Obama and Putin are odd couple at Beijing summit

U.S. President Barack Obama and Russian President Vladimir Putin spoke briefly on the sidelines of APEC summit but did not delve into the issues that divide their two countries 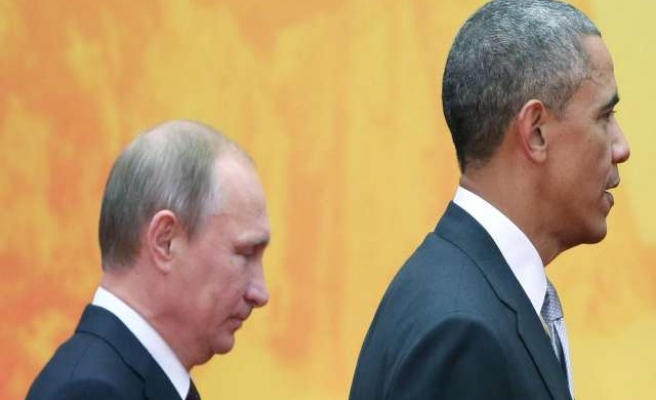 A few brief encounters between Barack Obama and Vladimir Putin during an Asia-Pacific summit in China on Tuesday spoke volumes about the chilly state of relations between the United States and Russia.

With the two men crossing paths twice this week, first in Beijing and later at a G20 summit in Brisbane, Australia, there was little chance they could avoid interacting on the international stage - and with the eyes of the world press and fellow leaders upon them.

Obama and Putin have never had anything close to personal chemistry, and with tensions high especially over Russia's role in the conflict in Ukraine, there was little warmth on display in their contacts at the Asia Pacific Economic Cooperation (APEC) forum.

When the summit opened in a sprawling convention center at a lake outside Beijing, Chinese President Xi Jinping walked in with Obama and Putin, both unsmiling, on either side of him.

"It's beautiful, isn't it?" Putin was overheard saying in English in Obama's general direction, referring to the ornate conference room.

"Yes," Obama replied, coldly, according to journalists who witnessed the scene.

The three leaders stopped at Xi's seat at the table. Putin reached out and clapped Obama on the shoulder. Obama barely responded. The two then took their seat to Xi's left and right.

Later, Obama and Putin were spotted in businesslike conversation, trailed by a translator, as they entered a hall for the summit "family photo."

"On three occasions throughout the day, for a total of approximately 15-20 minutes, President Obama had an opportunity to speak with President Putin," said White House spokeswoman Bernadette Meehan. "Their conversations covered Iran, Syria, and Ukraine."

The two leaders would seem to have much to discuss but little chance of finding common ground. In addition to Ukraine, they are deeply at odds over Russia's backing for Syrian President Bashar al-Assad.

Communicating mostly by telephone over the past year, their contacts have been described as frustratingly tense as relations between Washington and Moscow have fallen to a post-Cold War low.

Obama has insisted that Russia stop supporting pro-Russian separatists in eastern Ukraine while Putin has dismissed the sanctions that the United States and the European Union have slapped on Moscow as counterproductive.

Obama's deputy national security adviser, Ben Rhodes, told reporters in Beijing on Tuesday that any encounter would be a chance for Obama to remind the Russian leader of his promise to help resolve the Ukraine crisis peacefully.

The two leaders last held brief informal talks on the sidelines of D-Day anniversary celebrations in Normandy, France in June.

Meanwhile, scrutinising body language between the two has become something of a pastime in diplomatic circles.

The contrast in their personal styles, Putin brash and macho, Obama more professorial and sometimes self-conscious, was also on display at APEC.

At a tree-planting ceremony at the summit venue, Putin swaggered up, chest out, and shoveled mud onto the roots of a partially-planted tree.

Obama walked up with his hands clasped behind his back, picked up the shovel, grinning slightly, and piled mud on his tree, according to a pool report of the event.

When a Spanish-language camera crew called for his attention, Obama responded with "Hey, hombre" and waved.