Obama called Myanmar to end discrimination against Rohingya people, urging in his strongest comments on the persecuted Muslim minority that the government grant them equal rights, and said barring Suu Kyi from Myanmar presidency "doesn't make much sense" 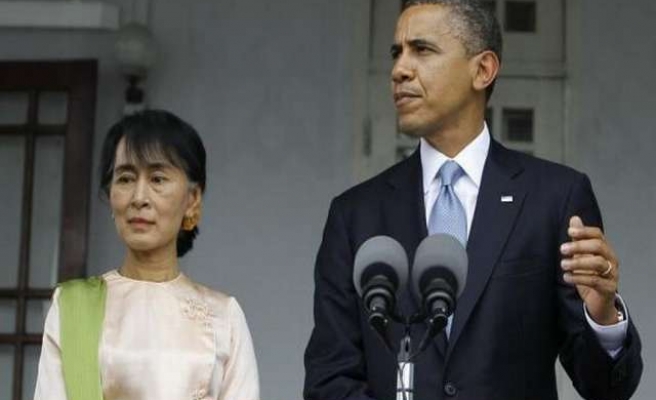 U.S. President Barack Obama called on Friday for Myanmar to end discrimination against Rohingya people, urging in his strongest comments on the persecuted Muslim minority that the government grant them equal rights.

Most of Myanmar's 1.1 million ethnic Rohingya Muslims are stateless and live in apartheid-like conditions in Rakhine state in the west of the predominantly Buddhist country. Almost 140,000 are in camps after being displaced in attacks by ethnic Rakhine Buddhists in 2012.

Obama, in Myanmar for a regional summit, said legitimate government was based on "the recognition that all people are equal under the law".

"Discrimination against a Rohingya or any other religious minority, I think, does not express the kind of country that Burma over the long term wants to be," Obama told a news conference with pro-democracy leader Aung San Suu Kyi at her lakeside home in the city of Yangon.

Suu Kyi, who won the Nobel Peace Prize in 1991 for her efforts to bring democracy to Myanmar, also known as Burma, has been notably quiet about the treatment of Rohingya.

Prejudice against the minority group is widespread in Myanmar and many people refer to them as Bengali, a term suggesting they are illegal immigrants from Bangladesh despite having lived in the area for generations.

Suu Kyi urged Myanmar's people "to learn to live in harmony" but refrained from naming any specific group.

The term Rohingya is highly charged in Myanmar and government officials denounced U.N. Secretary-General Ban Ki-moon for uttering it at a news conference in the capital, Naypyitaw, on Wednesday.

"We always tell the U.N. that we do not accept their using this term every time we get a chance," Deputy Foreign Minister Thant Kyaw told reporters the following day.

On Friday, the state-run New Light of Myanmar newspaper ran an open letter to Ban from Rakhine state chief minister Maung Maung Ohn, who expressed "deep disappointment" and said the international community's use of the term had "alienated the Rakhine population".

"The right of an ethnic group to self-identify is a core human right, and Burmese ranging from President Thein Sein to Aung San Suu Kyi need to recognise that fact if they are serious about human rights and reconciliation in their ethnically diverse nation," he told Reuters.

It was the clearest statement Obama has made on Suu Kyi's political future, but he stopped short of explicitly urging that changes be made to allow her to run for the presidency.

Washington has pressed for more change in Myanmar, where political and economic reforms launched two years ago seem to have stalled and taken the sheen off what was seen as a rare foreign policy achievement for Obama. But it has signalled its willingness to let the transition take shape and has avoided specific demands.

"I don't understand a provision that would bar someone from being president because of who their children are - that doesn't make much sense to me," Obama told reporters outside Suu Kyi's lakeside home in Yangon without naming her.

Suu Kyi, like Obama a Nobel laureate, is barred from contesting for president in next year's election because her two sons are foreign nationals.

"From the point of view of democracy, it is not right to discriminate against one particular person," she said of the law.

Many believe the law on presidential candidates was written specifically with Suu Kyi in mind. She remains wildly popular and her party - which swept a 1990 vote that was ignored by the military - is expected to do well in next year's election.

Suu Kyi denied that she had differences with the United States over the transition process in Myanmar.

"Our reform process is going through a bumpy patch," she said. "But this bumpy patch is something we can negotiate with commitment and the help and understanding of our friends around the world.

"When Burma becomes a fully functioning democracy in accordance with the will of the people, we will be able to say that among those friends who enabled us to get there, the United States was among the first," she said, using the old name for Myanmar.

Obama was on his second visit to Myanmar, where he attended a regional summit and held a bilateral meeting with President Thein Sein. After the meeting on Thursday, Obama said he was optimistic about political change in Myanmar, but that much remained to be done.

Myanmar began its emergence from international pariah status in 2011 when military leaders launched reforms after nearly half a century in power and installed a quasi-civilian government.

But substantial power is still held by the military, and that needs to be dealt with as the country makes the transition to a full democracy, Obama told a group of Myanmar lawmakers at a meeting earlier on Thursday.