One Afghan protester has been killed and at least five have been wounded in the latest in a series of protests against Koran burning in the U.S. 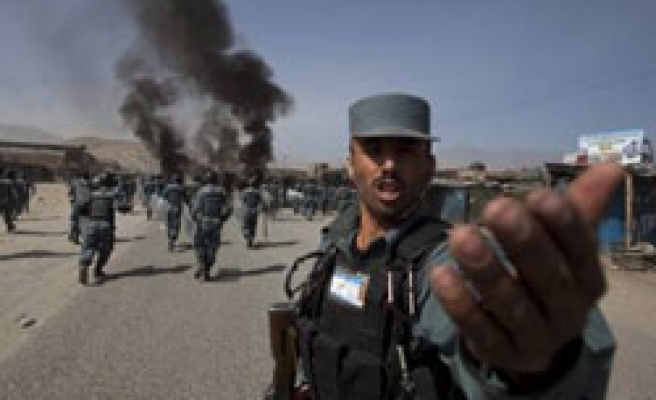 One Afghan protester has been killed and at least five have been wounded in the latest in a series of protests against Koran burning in the U.S as police fired into the air to disperse thousands in Afghanistan's capital on Wednesday, witnesses and police said.

Demonstrators chanted "Death to America", "Death to Christians", and "Death to Karzai", the latter referring to Afghan President Hamid Karzai, in the biggest protests since unrest erupted last week over Koran-burning incidents and an abondened threat by a U.S. pastor to burn the Koran.

There were at least two incidents of abuse of the Koran in Lower Manhattan. Separately, two evangelical preachers not affiliated with any mainstream church burned two copies of the Koran in Tennessee.

"There are more than 10,000 of the demonstrators," police officer Mohammad Usman.

The protests come three days before a parliamentary election.

They follow three days of protests at the weekend over threats by a U.S. pastor, which he later abandoned, to burn copies of the Koran. Three people were killed in those protests.

A police source later said one person had been killed and five wounded, and that the toll could rise.

At the Pul-e-Kandahari, or Kandahar bridge in Kabul, police were ordered to advance towards one group of hundreds of protesters who were throwing stones and shouting "Death to American slaves" at police.

Police were seen firing into the air and dragging away several protesters. At one point, volleys of gunfire could be heard. The protesters scattered, some sheltering in nearby houses in the mainly ethnic Pashtun and Tajik area of Kabul.

The protesters earlier gathered in the west of the capital, burning tyres and blocking a main highway link to the south. Thick black smoke rose above the area and police kept journalists several hundred metres back.

Reuters witnesses at the scene saw two unconscious people, covered in blood, being carried away suffering what appeared to be gunshot wounds.