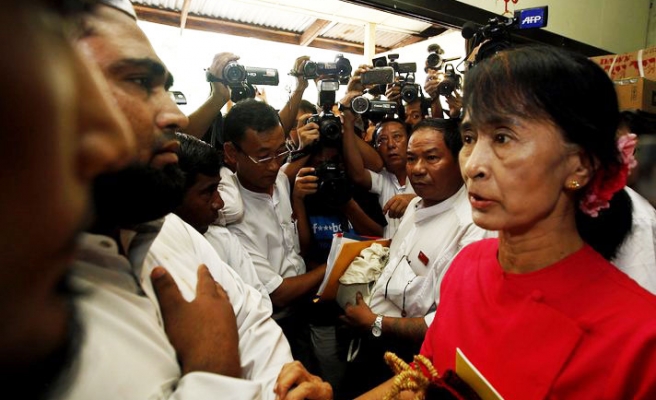 The Yangon-based Myanmar Times said Shwe Mann, head of the ruling Union Solidarity and Development Party, had ruled out any changes to the 2008 constitution drafted by the former junta.

“The 2015 elections will be held in accordance with the laws stipulated under the 2008 constitution and relating laws,” Shwe Mann was quoted by the Democratic Voice of Burma news website, based in Norway.

The annoucement was challenged by Suu Kyi’s party, the National League for Democracy, known as the NLD, which said Shwe Mann did not have the authority to make the decision. Shwe Mann, a leading figure in the military regime that stood aside in 2011, is expected to stand for the presidency.

NLD spokesman Nyan Win told Radio Free Asia: “Only the representatives can decide when to make the amendments – the speaker cannot decide this.”

He added: “The present government and the USDP [Union Solidarity and Development Party] want change but they do not want to lose their privileges nor do they want their lives to be affected.”

“If none of articles of the 2008 constitution can be amended and the 2015 election is held based on the current constitution, it will be very hard to expect that the election will be a free and fair one,” he said.

Parliament is currently discussing proposals from political parties, civil organizations and the military, which controls 25 percent of parliamentary seats, giving it a veto on consitutional reform. The NLD has proposed changes that would clear the way to altering the article prohibiting Suu Kyi from standing for president due to her sons’ British nationality. On Monday, most military lawmakers rejected the amendments.

Shwe Mann said a May referendum will gauge public opinion but any amendments would not be considered until the next parliament meets in 2016.

The former general, who was the third-ranking member of the State Peace and Development Council that ruled Myanmar from 1988 to 2011, hopes to succeed Thein Sein to the presidency.

The NLD and the 88 Generation student group have collected 5 million signatures, equal to a tenth of Myanmar’s population, to a petition calling for constitutional amendments.

Shwe Mann’s announcement followed U.S. President Barack Obama’s visit to Myanmar last week for the ASEAN summit, when he called on the government to implement reform and stressed the need for a credible election, questioning the constitutional rule that barred Suu Kyi because of her children.

The NLD is widely expected to win the election, due to be held in late 2015.

Suu Kyi, the daughter of independence hero General Aung San, spent most of two decades in detention during the period of military rule as she fought to bring democracy to Myanmar. The Nobel peace prize holder, 67, had lived in Britain before returning to Myanmar in 1988, as monks and students led protests demanding democratic reform.

The demonstrations were brutally suppressed by the army before it seized power. The NLD won an election called in 1990  but the military ignored the results.

Last week Suu Kyi said the reforms initiated by the nominally civilian government were going through a “bumpy patch.” Despite early optimism there are widespread concerns that the government is backsliding on reform.