The number of people rendered homeless by the devastating floods in Pakistan makes the critical task of securing greater amounts of aid more urgent. 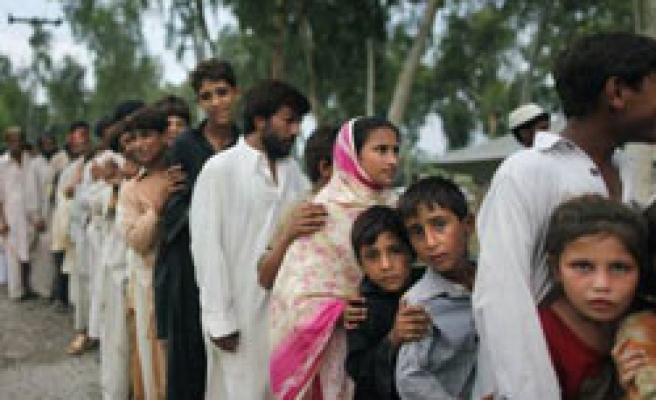 More than four million Pakistanis have been made homeless by nearly three weeks of floods, the United Nations said on Thursday, making the critical task of securing greater amounts of aid more urgent.

The U.N. had earlier said that two million people had lost their homes in the worst floods in Pakistan's history.

Aid agencies have been pushing for more funding as they try to tackle major problems such as food supplies, lack of clean water and shelter and outbreaks of disease.

The economic costs of the floods are expected to run into the billions of dollars, stepping up pressure on Pakistan's government.

Floods have ruined crops over an estimated area of more than 1.6 million acres, hammering the mainstay agriculture industry.

Flood victims are turning on each other as aid is handed out. The elderly sometimes take food from children as anger rises over the government's perceived sluggish response to the crisis. In the small town of Alipur in the agricultural heartland Punjab province, troops and police with batons charged flood victims trying to grab food unloaded from a helicopter.

Villages were totally submerged and in many places people were stranded either on rooftops or high ground. Some waved empty pots and pans at a military helicopter, wondering, like millions of others, when food supplies will arrive.

The Asian Development Bank said it would extend a $2 billion assistance package for emergency rehabilitation and reconstruction.

Hundreds of villages are isolated, highways and bridges have been cut in half and hundreds of thousands of cattle -- the livelihoods of many villagers -- have drowned.

Only a small minority of the 6 million Pakistanis desperate for food and clean water have received help after floods that have killed up to 1,600 people.

"According to rough estimates, over 4 million people in Sindh and Punjab still do not have a roof on their head," said U.N. spokesman Maurizio Giuliano, referring to southern and central provinces worst hit by the flood. "This situation is of high concern".

Fears are rising for possible epidemics.

The armed forces have raised their profile by leading rescue efforts, but analysts don't expect the military, which has ruled Pakistan for more than half its history, to try to stage a coup.

Juan Miranda, ADB Director General for its Central and West Asia department, said it was hard to quantify damages.

"But what is clear is that this disaster is like no other in living memory -- and that our response must also be unprecedented, equal to the need, and fast."

A senior official of the Pakistan Atomic Energy Commission said the floods had not damaged the country's nuclear power plants.

Neither have the floods changed the dynamics of the struggle between the army and militants. Neither side has indicated a change in strategy.

Aid funding has improved, with nearly half the $459 million needed to fund initial relief efforts secured after days of lobbying donors. But the situation on the ground remained grim.

"The response of donors to this crisis is getting better and better but it is still inadequate," Giuliano told Reuters

Child trafficking is a big business in Pakistan. Giuliano expressed concern that since the floods have made millions homeless, children were at an even greater risk.

"You may have families who take drastic measures because they need to survive," he said. "So even though we don't have any suggestion that it is happening already, this can be a concern."