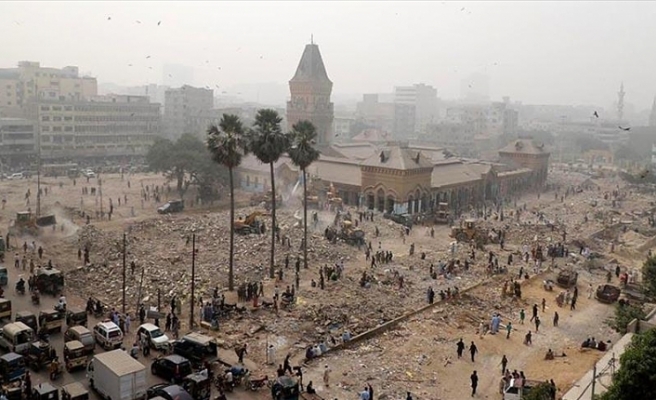 Until a few weeks ago, Karachi’s historic Empress Market was home to hundreds of kiosks selling fruits, vegetables and daily-use items. Pedestrians, vehicles, buyers and sellers fought for space.

But a recent government drive against encroachment in the city has razed hundreds of shops to the ground rendering thousands unemployed.

The top court last month ordered the government of southern Sindh province, of which Karachi is the capital, to demolish illegal structures and bring the metropolis back to its “original shape”.

Things are likely to deteriorate as the ill-planned drive is expected to target more "illegally built" houses, mainly in low-income areas.

The city government two weeks ago demolished hundreds of small to medium houses in Mehran Town -- a low-end locality in Karachi's eastern outskirt -- declaring them illegal even though residents insisted they had bought the units through real estate brokers.

“I cried and begged. I showed them documents to prove that I have bought this house. But they did not listen to me and demolished my house,” said Nazeeran Bibi, who works as a domestic maid, trying to fight back her tears.

Angry residents later charred the offices of five real estate agents, who according to them, had brokered their buying deals .

A visit to Saddar area, the city's commercial hub, shows the extent of disruption the ongoing drive has caused to small-and-medium businesses.

“Our family had been running eight shops here [in Empress Market] since 1986. There was nothing illegal. We have all allotment orders issued by the Karachi Metropolitan Corporation," said Mohammad Idrees, one of the affected shopkeepers.

Traders associations complain that shopkeepers were not even given time to relocate their stock, adding that officials involved in selling government land to citizens should be brought to task.

Since mid-November nearly 4,000 shops have been demolished, according to government statistics, depriving an estimated 20,000 workers of their livelihoods.

"Many areas now look like Beirut," said Mehmood Hamid, chairman of a traders' association, referring to a popular terminology coined to highlight the level of destruction in line with that of the civil war in Lebanon in 1980s.