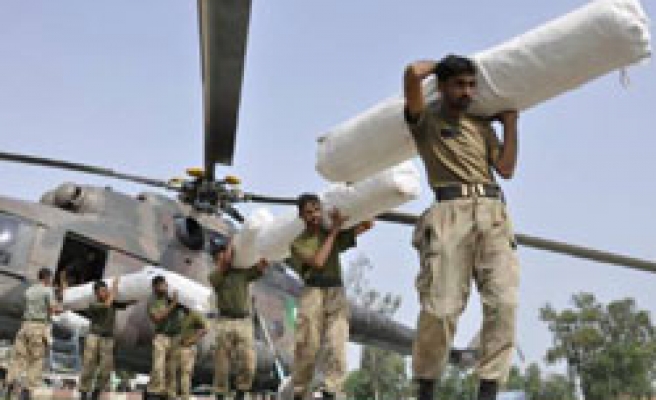 "The first priority of these helicopters is relief work," a security official said on condition of anonymity.

Military officials say they had not withdrawn any of the 140,000 ground troops fighting fighters along the border with Afghanistan, instead drawing them from the central Punjab region.

Devastating floods are now affecting a third of the country and have made 4 million people homeless.

The Pakistan army is leading relief efforts and has gained in stature as the civilian government led by President Asif Ali Zardari has come under sharp criticism for its sluggish response to the disaster.

Also charities were quick to provide help to victims of the floods while authorities appeared to dither.

Meanwhile, US drone attacks did not stop in flood-hit Pakistan.

"The missiles hit a militant compound and a house adjacent to it. We have confirmed reports of 20 dead," said one of the intelligence officials.

Another official said members of the Haqqani network -- one of the most effective group fighting Western troops who occupy Afghanistan -- had been using the compound.