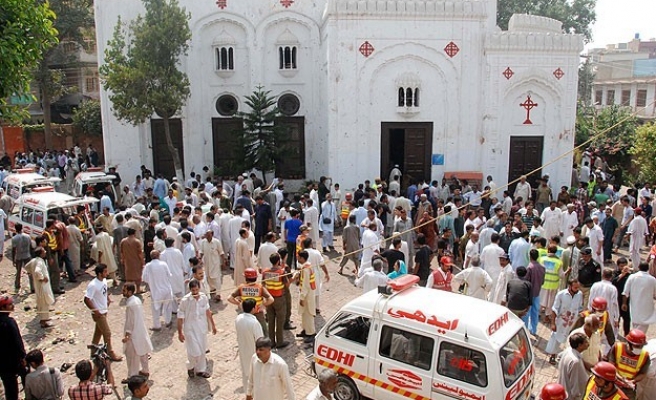 Angry Christians took to streets in various cities of Pakistan on Sunday to protest a suicide bombing that targeted a church in the northwestern city of Peshawar.

At least 60 people have been killed and 60 injured Sunday when two suicide bombers blew themselves outside and in the courtyard of a church in the northwestern city of Peshawar.

Eyewitnesses said more bodies are still lying inside the church building, with the death toll expected to rise.

According to eyewitness, two suicide bombers blew themselves up near the security barrier of the church where hundreds of Christians were attending the Sunday service.

Eyewitnesses told reporters that they have heard two blasts.

The first seemed like a hand grenade attack to baffle the security personnel, while the second was a huge explosion which could be heard within an area of nearly three kilometers.

Security officials later confirmed that both blasts were suicide bombings, one at the gate and the second inside the church courtyard.

The Council for International Religion, which deals with the Christian Missionary institutions in the country, has announced three days mourning.

The council suspended study in missionary schools and colleges in Peshawar for three days.