Police say 30 others have been wounded in a blast that appears to have been aimed at the Hazara community. 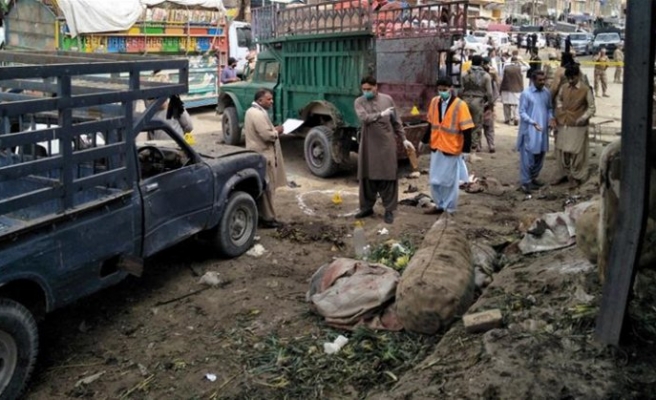 At least 16 people have been killed and another 30 wounded as an explosion ripped through a market in the southwestern Pakistani city of Quetta, police say, the latest attack to target the city's minority Hazara community.

"Members of the Hazara community go to the market every day to shop, and we provide them with a security escort," he said.

"They were at the market as police and [paramilitary] Frontier Corps soldiers patrolled the area. There was a store selling potatoes, and that is where the explosion has taken place."

Images from the scene of the explosion showed blood sprayed across the dirt floor of the market, damaged vehicles and sacks of potatoes split open by the force of the blast.

Cheema said police would not know whether the bomb was planted or a suicide attack until investigating teams, who had cordoned off the site, completed their analysis.

"The bomb appeared to have been set in the potato sacks, but we cannot rule out whether it was a suicide attack just yet," he said.

At least seven members of the Hazara community and one paramilitary soldier were among those killed, he said.

Since 2013, more than 509 Shia Muslims - mainly ethnic Hazaras - have been killed in a campaign of targeted shootings and bombings in Balochistan province, according to government data.

The majority of attacks have occurred in the provincial capital, Quetta, where most of the country's roughly 600,000 Hazaras reside.

The city's Hazara residents now live in two heavily protected enclaves on either side of the city, with movement outside of those areas restricted by threats to their lives.

Members of the community say they refrain from engaging in business or education in other parts of the city because of the risks.

Every morning, police guard a convoy that leaves the Hazara enclave to visit markets so that Hazaras may stock up on basic necessities.

This is not the first time vegetable traders have been targeted by attackers.

In October 2017, unidentified gunmen opened fire on a van bound for the fruit and vegetable market, killing the driver and four others, police say.

No group immediately claimed responsibility for the attack on Friday.