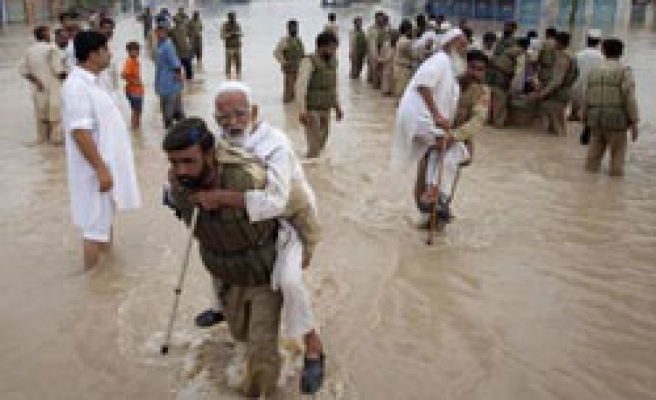 Floods caused by a week of heavy rain have killed more than 1,000 people in Pakistan's northwest and rescuers battled on Sunday to distribute relief to tens of thousands of trapped people.

A westerly weather system moving in from Iran and Afghanistan, combined with heavy monsoon rain, caused the worst floods on record in Pakistan in the past week, with the northwestern province of Khyber-Pakhtunkhwa the worst hit.

Provincial Information Minister Mian Iftikhar Hussain told Pakistani media more than 1,000 people had been killed and the toll could be even higher. In Afghanistan, dozens of people were killed and thousands were rescued after flash floods in the northeast.

"The level of devastation is so widespread, so large, it is quite possible that in many areas there are damages, there are deaths which may not have been reported," army spokesman Major-General Athar Abbas told reporters late on Saturday.

More than 30,000 Pakistani army troops have rescued over 19,000 people from the marooned areas but officials conceded some might still be trapped and awaiting help in remote areas including Kohistan, Nowshera, Dir and in the Swat valley.

"Virtually no bridge has been left in Swat. All major and minor bridges have gone, destroyed completely," Abbas said of the valley which has borne the brunt of the floods.

A Reuters photographer in Nowshera on Sunday saw two bodies lying on the ground and dead animals in several places, as groups of people waded through floodwaters to dry land.

Aid agencies said more than 500,000 people were affected by flash floods and landslides in the northwest.

"There is now a real danger of the spread of water-borne diseases like diarrhoea, asthma, skin allergies and perhaps cholera in these areas," Shaharyar Bangash, World Vision Pakistan's programmes manager, said in a statement.

The meteorological department has forecast more rain in the coming days.

Downstream, parts of the central province of Punjab were flooded and emergency crews aided by soldiers airlifted people from hundreds of submerged villages on Sunday in the area of Taunsa, a town on the Indus river about 388 km (240 miles) southwest of Islamabad.

Officials said huge surges were expected in the southern province of Sindh between Tuesday and Thursday, expected to cause widespread damage to property and farmland near river banks and in low-lying areas.

"A super flood of this magnitude will be the first in 18 to 20 years to hit Sindh, but major cities like Karachi and Hyderabad were unlikely to be affected," Jameel Soomro, a spokesman for the provincial Sindh government, told Reuters.

"The risk is there, danger is there but we are doing our best to minimise losses as much as can." he said.