Victims of Pakistan's floods queued to get medical treatment as doctors complained of a shortage of medical supplies to treat a rising number of patients. 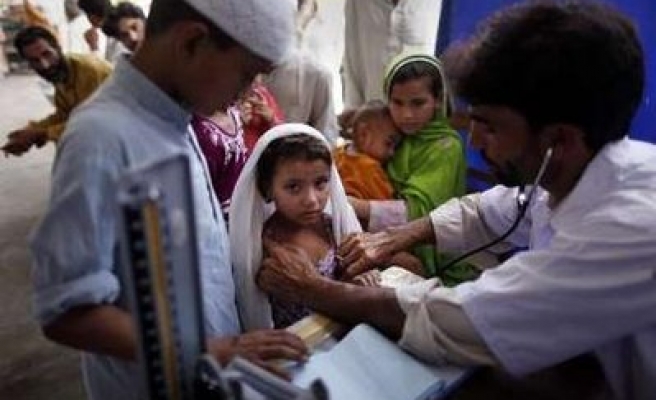 Victims of Pakistan's floods queued to get medical treatment on Tuesday as doctors complained of a shortage of medical supplies to treat a rising number of patients.

Monsoon floods have receded in some areas but aid agencies fear disease, food shortages and malnutrition may create new crises as people head back to their shattered towns and villages and try to rebuild their homes and lives.

"Whatever stock of medicines we have is about to finish and the number of patients will increase in the coming days," said Ashiq Hussain Malik, medical superintendent of Muzaffargarh's main district hospital in Punjab province.

"Nearly 60 percent of patients are suffering from gastroenteritis, diarrhoea, skin and eye infections and the patients who are coming here are in a pretty bad condition."

The United Nations has warned of imminent waterborne diseases, including typhoid fever, shigellosis and hepatitis A and E, and vector-borne diseases like malaria and dengue fever.

The floods have left one-fifth of the country under water, an area the size of Italy. Some Pakistanis have grown increasingly angry with the sluggish government response, and are turning to Muslim charities to get help.

The floods have killed more than 1,600 people and left at least 6 million homeless.

"In magnitude and scope this is one of the greatest catastrophes which the WFP has had to handle," said Josette Sheerer, executive director of the World Food Programme (WFP) after visiting flood-hit areas in south Punjab.

"We could be looking at a year of food shortages and high food prices."

Muzaffargarh hospital is treating 1,000 flood victims. People lay on the floor or their own rope beds because of limited space.

"I came to hospital around dawn and I'm still waiting for my number," Naseem Bibi said as her five-year-old daughter, suffering from diarrhoea, slept on the ground.

"Only those people who have acquaintances in the hospital are getting medical treatment. No one is looking after poor people like us."

The government is faced with the daunting task of securing enough aid for relief operations, meeting the needs of people who will want compensation for destroyed homes and livestock, and blunting long-term economic pain.

"The flooding significantly raises near-term growth and inflation risks and most probably postpones any near-term opportunity for transitioning back to the country's growth trend with manageable inflation and macroeconomic balance," said Moody's Investors Service.