Defence Minister Khawaja Asif said the government would not hesitate to enforce its writ and was considering cracking down against those attacking state institutions. 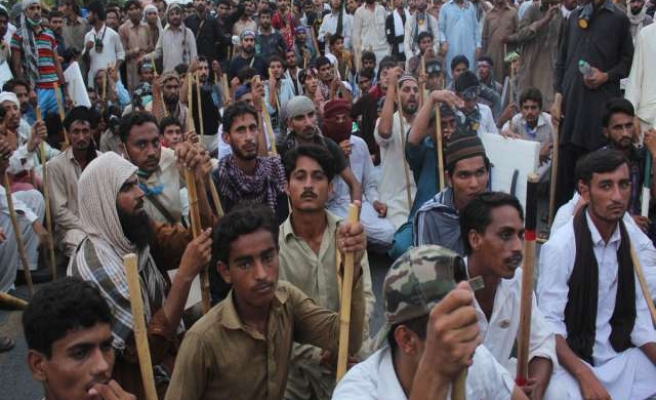 Pakistan is preparing to launch a selective crackdown against anti-government protesters trying to bring down the government of Prime Minister Nawaz Sharif, the defence minister said, warning demonstrators against storming government buildings.

Dashing chances of a peace deal between the government and protest leaders Imran Khan and Tahir ul-Qadri, protesters stormed the state television building and have also tried to march on Sharif's residence in central Islamabad.

Defence Minister Khawaja Asif told Reuters in an interview at his house hours after the storming of the state television building the government would not hesitate to enforce its writ and was considering cracking down against those attacking state institutions.

"If not mass arrests, selective use of force can be used," Asif said, describing one option the government may decide to exercise following a meeting between Sharif and his top aides.

"The writ of the state must be enforced. We hope to make a decisive move sometimes later today, not in the evening but even before that," he said. "I personally feel that the next few hours will determine the course of coming events."

Commentators have been divided over what Sharif could do to defuse the crisis, and Asif's remarks confirmed that a crackdown was on the cards as the government debates its further actions.

Asif, considered to be in favour of talks, is one of a growing number of members of Sharif's cabinet who believe it is time for tougher action against thousands of protesters massed in Islamabad to demand the prime minister step down.

Rounds of negotiations have failed to end the crisis that has gripped Pakistan for more than two weeks, with protest leaders saying they will not back down unless Sharif resigns.

The army is expected to play a key role in how the conflict unfolds but it has not directly intervened, saying the crisis had to be solved politically.

Some in Sharif's office have accused the army of backing the protests in order to weaken a government that had pursued some policies the army is known to oppose.

But Asif dismissed such speculation.

"The army as an institution has absolutely nothing to do with this. They have supported democracy," he said. "This is a very good thing, very reassuring and gives us a lot of comfort."

With tension rising, the army said it was asked by the government to help defuse the crisis. It was unclear how the deadlock could be resolved with the opposition flatly refusing to leave the streets until Sharif quits.

Asif said Sharif's resignation was out of the question.

"Chances of the PM resigning? Zero," he said.

Asked about the chances of the military launching a coup, he said: "Zero. Absolutely zero."

Pakistan, a nuclear-armed nation of 180 million people, has been ruled by the military for half of its history. Sharif himself was toppled in a coup in 1999 during his previous tenure.

This time, few observers expect the army to try to grab power again but it might feel forced to step in in some way if violence on the streets gets out of hand.

The demonstrations come at a difficult time for Pakistan, already plagued by an Islamist insurgency, sectarian tension and recurrent power shortages. Many Pakistanis are deeply unhappy with the government's performance.

For Asif, military intervention would be the worst-case-scenario.