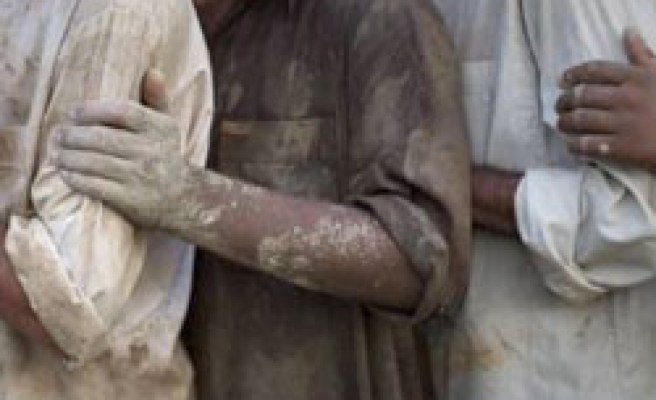 The floods have devastated the lives of more than 3 million people, a U.N. spokesman said on Tuesday, while outrage over the government's response to its people's plight spreads.

The catastrophe, which started almost a week ago and has killed more than 1,400 people, is likely to deepen as more rains are expected. A breakout of water-borne diseases such as cholera could create a health crisis.

Poorly resourced Pakistani authorities are struggling to help flood victims, many of whom have lost everything and say they received no warnings that raging waters were heading their way.

United Nations World Food Programme spokesman Amjad Jamaal said an estimated 1.8 million are in dire need of water, food and shelter. He said some people are being bitten by water snakes.

Anger was palpable in towns such as Charssada. A Reuters reporter saw people attacking trucks distributing relief items. Police then charged at them with batons.

Bistma Bibi, 65, who lost two grandsons in the floods, accused state relief workers of only helping friends or relatives. "I came here at 5 o'clock in the morning. I begged and fought but got nothing. They're giving them (supplies) to their people," she said.

Anger was growing among survivors over the enormity of their plight as President Asif Ali Zardari pressed on with a visit to Europe.

The U.S. embassy has announced $10 million in immediate humanitarian aid, with more to be earmarked as necessary. The European Union will donate 30 million euros ($39.5 million) while China will donate 10 million yuan ($1.5 million).

Amir Khan Hoti, chief minister of Khyber-Pakhtunkhwa province, the epicentre of the crisis, said the aid "should be bigger because the losses and damages are so huge".

Pakistan's meteorological service forecast widespread rains in the southern province of Sindh, Punjab in the centre, Pakistani-held Kashmir, the northwest and southwestern Baluchistan during the next three days.

Flash flooding was expected in parts of Khyber Pakhtunkhwa, Punjab and Baluchistan, it warned, with heavy thunderstorms in Islamabad.

"The main problem there is outbreak of diseases, especially in Nowshera district where hundreds of dead animals are lying on the ground," said Adnan Khan, spokesman for the Crisis Management Authority in Khyber-Pakhtunkhwa.

"Most roads linking flood-hit areas have been blocked and 91 bridges have been either washed away or damaged, so access to affected areas is still a challenge."

Islamist charities have stepped in to provide aid as the groups played a key role in the relief effort following a huge earthquake in Kashmir in 2005.

"Since the flood hit our area, I did not see any food or relief packets from the government. Their offices have been washed away or damaged," said school teacher Yar Mohammad, waiting to cross a makeshift bridge over a river in Swat Valley.