Pakistan leader distances himself from army as crisis drags on -UPDATED

Sharif said he had nothing to do with the army's decision to step into the conflict. But the army swiftly denied this, saying it had been specifically instructed by the government to step in. 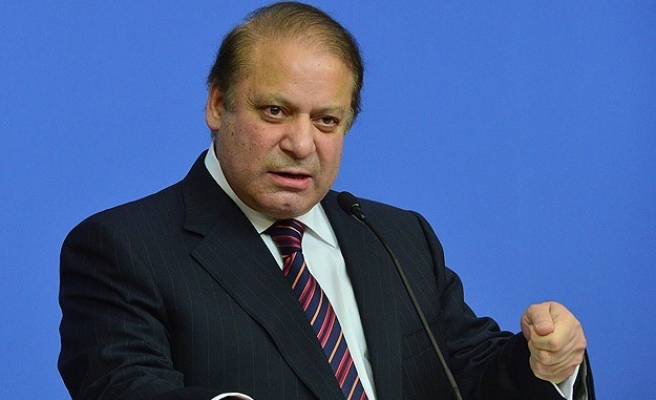 Pakistan's prime minister, weakened by weeks of opposition protests calling for him to resign, distanced himself from an army move to intervene in the crisis on Friday, saying he was not turning to the military for help to defuse the stand-off.

But in an embarrassing twist for the prime minister, the army swiftly denied this, saying it had been specifically instructed by the government to step in.

Nawaz Sharif's efforts to end the conflict have repeatedly failed in recent days, leaving Pakistan locked in a dangerous deadlock with thousands of protesters massing outside parliament for weeks in a country that has seen a string of military coups.

Both men later had talks with the general. Qadri has not commented on the discussions while Khan said the army would act as a guarantor on one of his key demands, for an investigation into his accusations of fraud in an election last year.

The army has not commented.

Prime Minister Sharif, who is not related to the army chief, emerged significantly weakened from the crisis. Turning to the army for help could be embarrassing for a prime minister who himself was toppled in a military coup in 1999 during his previous term in office.

Addressing parliament on Friday, Sharif said he had nothing to do with the army's decision to step into the conflict.

"The army did not ask to play the role of mediator, neither have we requested them to play such a role," he told the assembly where he enjoys a strong majority.

Sharif added that he had not objected to both Khan and Qadri meeting the army chief. "If ... they want to meet the army chief then they should certainly meet," he said.

However, the army's press wing quickly tweeted: "(The army chief) was asked by the Govt to play facilitative role for resolution of current impasse, in yesterday's meeting, at (Sharif's) House."

A nuclear-armed nation of 180 million, Pakistan has been ruled by the military for half of its entire history and has repeatedly oscillated between civilian and military rule.

Although the army's role is key to how the crisis unfolds, few believe the army is bent on seizing power again.

However, its public intervention has demonstrated just how fragile Pakistan's democracy still is more than a year since Sharif swept to office in the country's first democratic transition of power.

"This is the end of democracy, the constitution and supremacy of the parliament in the country," retired Justice Tariq Mehmood was quoted as saying by the respected Dawn daily.

Sharif has displeased the army by trying to strengthen civilian rule and improve relations with India and Afghanistan, and the latest conflict has given the military an opportunity to sideline him on security and foreign policy issues.

Sharif also angered the military by putting the former army chief, Pervez Musharraf, on trial for treason. Musharraf ousted Sharif in the 1999 coup.

The army's involvement is likely to unnerve some Pakistanis but it also offers Khan and Qadri a face-saving solution to end their deadlocked protest as both are seen as close to the military.

In a last-ditched bid to appease the protesters on Thursday, the authorities registered a murder case to investigate the killing of 14 Qadri supporters during clashes with police at a protest in the city of Lahore in June.

The legal case names Sharif and his powerful brother Shahbaz Sharif - Punjab's chief minister - among those responsible. Although it is not a legal indictment, the move could lead to Shahbaz's resignation and put further pressure on the prime minister.

Thousands of Qadri and Khan supporters have camped in Islamabad's so-called Red Zone, where parliament and the prime minister's residence are located, since Aug. 15.

With many people sleeping rough in the heat, the area - within walking distance of many foreign embassies and ministries - is heavily littered with rubbish and reeks of human waste.

But as the protest movement began to lose steam following the army's intervention, only about 1,000 people remained there on Friday compared with about 10,000 late on Thursday.

When Khan turned up to make another speech on Friday afternoon, he addressed an almost empty site. "Freedom or death - those are my two choices. The jinn has left the lamp and can't go back in," he said from atop a shipping container.

Many protesters said they felt deflated after two weeks of rallying. "What was the point of sitting here for two weeks and saying we are here to find a peaceful, political solution if we were going to go running to the army?" said Sidra Faisal, 30.

Ahmed Ali, a 40-year-old university professor from Lahore, agreed: "The army should refuse to mediate. We are here to prove the people's power and you can see how it has shaken Nawaz Sharif's government. He doesn't know what to do."