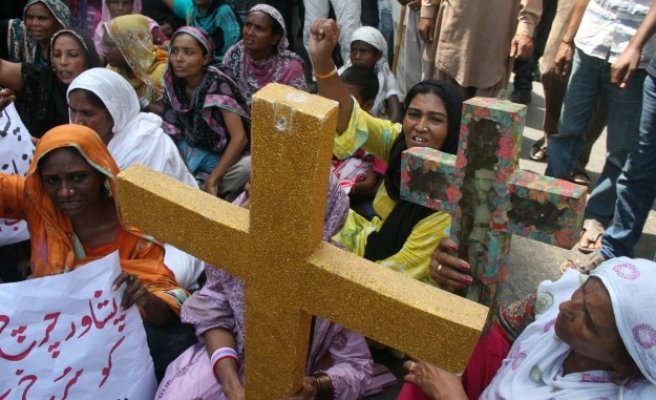 Pakistan was in a state of mourning on Monday for the 83 lives lost in twin suicide bombings targeted a church in the northwestern city of Peshawar one day earlier.

The government had announced three days of mourning nationwide, with the national flag flying at half-mast on government buildings in solidarity with the victims.

All the major political and religious parties, too, condemned the blasts and expressed solidarity with the nation's Christians.

As the twin blasts' 83 victims were buried in different parts of Peshawar, emotions ran high.

Doctors at the Lady Reading Hospital Peshawar described the condition of many of those injured as "precarious."

A state of emergency has been declared in the city's hospitals, where extra paramedical staff has been called up to cope with the huge number of wounded.

The All Saints Church, target of yesterday's bombings, reopened on Monday with hundreds of worshippers praying for the victims.

"We have made it clear, time and again, that Christians have nothing to do with US atrocities in the Muslim world. We have always condemned that," Michael said.

He was referring to a statement issued by the Taliban-affiliated Jundullah group, which claimed responsibility for Sunday's deadly attack.

A purported spokesman for Jundullah, which has been involved in various terrorist attacks in Pakistan, told a local TV channel that the Peshawar attack had come in retaliation for US drone attacks on Waziristan.

"The US authorities don't ask us before carrying out drone attacks," Gulfam William, another Christian leader, told AA. "We are Pakistanis. We were born here and will die here."

"This is an inhuman act," said Fowzia Siddiqui, whose sister Aafia – a neuroscientist – is currently serving a jail term in the US for alleged links with Al-Qaeda, as she joined the demonstration outside the Karachi Press Club.

"Those who have committed this [attack] have not served Islam. They have simply tarnished the image of Islam, which prohibits targeting children, women and elderly people even during war," she told reporters.

Thousands of Christians – carrying crosses, banners and posters inscribed with slogans against the killing of religious minorities – staged marches in Karachi, Lahore, Islamabad, Faisalabad, Peshawar, Quetta, Multan and other cities.

Long queues of vehicles could be seen on either side of the road, as infuriated youths burned tires and smashed vehicles.

Christians and civil society figures also protested in Islamabad, where they blocked the road leading to parliament for two hours.

One group of youths beat up some bikers who had attempted to bypass their traffic blockade.

Protestors went to the provincial assembly building in Peshawar and started pelting stones on vehicles and police.

Police are trying to control them.

Similar protests, accompanied by intermittent acts of violence, were also reported in Quetta.

Mobs also rioted in Bahawalpur City, forcing shopkeepers to pull their shutters down, and blocked the main highway for hours.

The Churches Council of Pakistan, for its part, has appealed to Christian protesters to remain peaceful.

Christians represent Pakistan's largest minority, accounting for some 3 percent of the country's population of 180 million.

A majority of Christians reside in Punjab, the country's largest and richest province, where most work in the education, sanitation and nursing sectors.