PNS Moawin can provide logistic support and rescue services to other ships at sea, carry 2 helicopters. 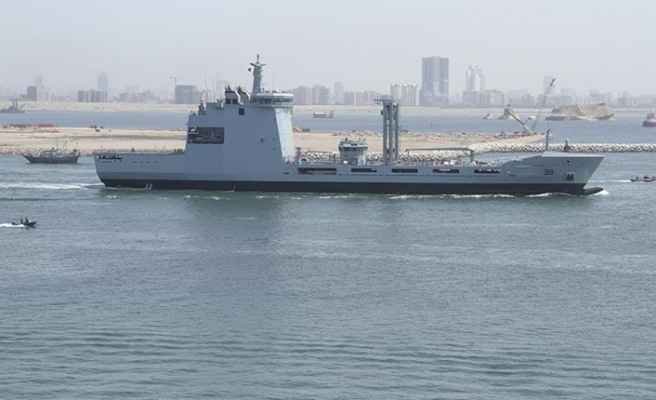 Pakistan Navy on Tuesday commissioned a 17,000-ton fleet tanker it has built in collaboration with a Turkish defense company in the southern port city of Karachi.

This is the largest warship ever constructed in the Karachi Shipyard and Engineering Works in collaboration with Turkish defense contractor STM, according to Pakistan Navy.

It is capable of performing a variety of maritime operations including provision of logistic support to other ships at sea through transfer of fuel and other military cargo. It can carry two helicopters. The ship is also equipped with state of the art medical facilities and can provide overseas support to friendly countries during any humanitarian assistance and disaster relief.

Alvi in his remarks said: “Pakistan and Turkey have always stood alongside each other during testing times. They are though nations apart, they share common values, culture and traditions. Pakistan always feels proud of its friendship with Turkey."

Abbasi said the Pakistan Navy has been striving to achieve self-reliance in warship construction.

“Construction of various naval platforms like F-22-P Frigates, submarines and combat support ships in Pakistan in past and various warships and submarine construction projects planned in future will substantially enhance our ship building capability,” he added.

Pakistan is set to receive 30 T129 Advanced Attack and Tactical Reconnaissance (ATAK) helicopters from Turkey under a deal finalized in July this year.

The helicopters, specifically designed for attack and reconnaissance, will be delivered gradually over five years.

Ankara is, meanwhile, buying MFI-17 Super Mushshak aircraft from Pakistan besides upgrading three Pakistani submarines and jointly building a fleet tanker, according to the local media.

In July this year, Ankara won a multibillion-dollar tender to supply four corvettes to Pakistan Navy -- a deal dubbed as the biggest export for Turkey’s defense industry in history by the then Defense Minister Nurettin Canikli.

According to the agreement, two ships will be built in Istanbul and two others in Karachi.