Flood waters across Sindh province have destroyed or damaged nearly one million houses and flooded 4.2 million acres since late August , according to UN. 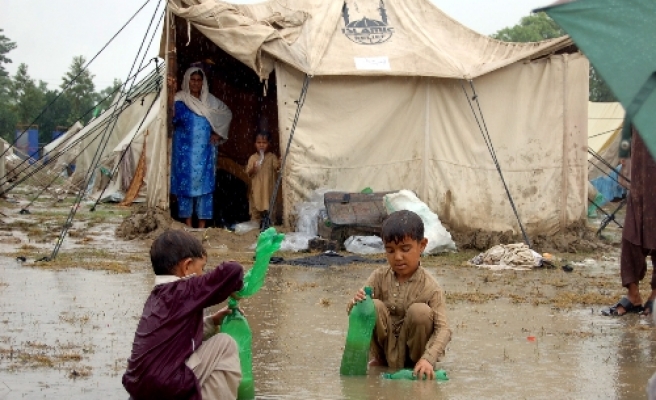 Pakistan's cash-strapped government, struggling to help victims of last year's devastating floods, faces another major test as monsoon rains sweep across the south, triggering flooding that has killed about 200 people in recent weeks.

Flood waters across Sindh province have destroyed or damaged nearly one million houses and flooded 4.2 million acres since late August , according to the United Nations Office for the Coordination of Humanitarian Affairs (OCHA).

"The situation in Sindh is already serious and there will be more flooding and more problems because of these rains," said meteorology department official Arif Mehmood.

"We have alerted all relevant government agencies dealing with the flood situation."

Neighbouring India has also been hit by floods, which have killed more than 300 people and affected close to nine million since monsoon rains started in June, said the Indian Red Cross.

"As the rain has already started a few months ago, in some places, the water has receded... There is fear in some of the states regarding outbreaks of diseases like diarrhoea arising from poor hygiene and sanitation," said John Roche, country representative for the International Federation of Red Cross.

A weather official said rice fields in West Bengal and Orissa, which are major producers of the grain, had been flooded but were not damaged.

Pakistan's military, which has ruled the country for more than half of its history, took charge of rescue and relief operations during last year's floods, while the government was seen as slow and ineffective.

Still, more than a year later, over 800,000 families remain without permanent shelter, according to aid group Oxfam, and more than a million people need food assistance.

Pakistan may also have lost up to two million cotton bales, or about 13 percent of its estimated crop, due to heavy monsoon rains during harvesting in Sindh, government and industry officials said. The United Nations said 1.6 million acres of crops had been affected by floods.

"The water flow to the sea is very slow. The drainage system has choked...the agriculture system could not stand the water pressure. So the devastation became immense," said Qadir.

Monsoon rains sweep the subcontinent from June to September and are crucial for agriculture in the region.

Pakistan, which relies heavily on foreign aid and an IMF emergency loan package, cannot afford heavy losses in the agriculture sector, a pillar of the economy.

The losses in the cotton crop were among the reasons Pakistan's economic growth that year slipped to 2.4 percent from the original target of 4.5 percent.

The 2010 floods killed about 2,000 people and made 11 million homeless in one of the country's worst natural disasters.

One-fifth of Pakistan was then submerged in water -- an area the size of Italy -- and the government faced $10 billion in damage to infrastructure, irrigation systems, bridges, houses and roads.

"The biggest issue is that they will drink water from anywhere, so water-borne diseases are a threat, especially diarrhoea and cholera," Sami Malik, a spokesman for the United Nations Children's Fund, told Reuters by telephone from flood-affected areas.

"An adult might not drink water if it's dirty. But a child, if he's thirsty, would just drink it."