By convening a joint session of parliament, where Sharif has a solid majority, the prime minister seeks to reaffirm that he is fully in control of the situation. 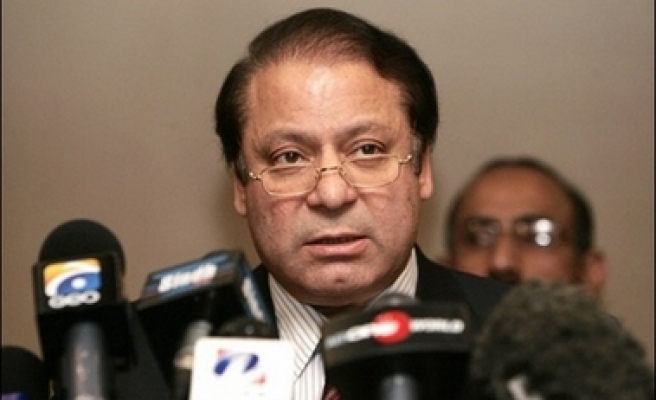 Pakistan's parliament threw its weight behind embattled Prime Minister Nawaz Sharif on Tuesday as a deepening crisis over violent protests demanding his resignation prompted fears of an army intervention.

Sharif, who enjoys a solid majority in the chamber, convened a joint session of parliament as he seeks to reaffirm that he is fully in control more than two weeks after mass protests seeking to bring down his government erupted in the coup-prone nation.

His office said parliament would be in session all week to allow all members of parliament to express their views. A string of politicians took stand during the first day on Tuesday, most of them expressing their resolute support for Sharif.

"Clear guidance from this parliament would give strength to the police. ... They are not revolutionaries, they are intruders and terrorists," he said of the protesters.

Aitzaz Ahsan from the opposition Pakistan People's Party said: "As you have said, you will not resign, no one can force you to resign. The entire parliament is with you."

Sharif, wearing traditional Pakistani clothes, made no remarks, taking notes and listening to the speeches. A spokesman said he might speak later in the week after all the lawmakers made their speeches in alphabetical order.

Pakistan has been in turmoil since mid-August when tens of thousands of protesters led by Imran Khan, a former hero cricket player, and outspoken cleric Tahir ul-Qadri flooded into the capital Islamabad, refusing to leave unless Sharif resigns.

The protesters accuse the government of corruption and Sharif of rigging an election last year. He denies that.

The demonstrations turned violent over the weekend as protesters armed with clubs and wearing gas masks to protect themselves against teargas tried to storm Sharif's residence. At least three people were killed and hundreds wounded.

But the capital was quiet on Tuesday, with no reports of violence. As deputies made their impassioned speeches, a crowd of a few thousand protesters massed peacefully just outside in the so-called Red Zone - a central area where Sharif's office, ministries and many embassies are located.

But, raising the spectre of more confrontation, Defence Minister Khawaja Asif said the government was considering taking action including "selective use of force" and arrests.

The chaotic scenes in the usually orderly capital have unnerved a nation where power has often changed hands though military coups rather than elections, prompting speculation that the military was prepared to intervene again.

Convening the week-long parliamentary session appears to be part of Sharif's attempts to divert attention from the streets and shift the conflict into the political arena.

Few expect the army to actually seize power this time but many believe it is using the protracted crisis to weaken Sharif and consolidate exclusive control of key security and foreign policy issues such as relations with India and Afghanistan.

Seriously denting Khan's support among his ranks, the head of his own Pakistan Tehreek-e-Insaf party said that Khan was effectively acting on the orders of the army, suggesting that the crisis was akin to a soft coup.

Javed Hashmi, Khan's right-hand man and a veteran politician, has fallen out with his leader and condemned protesters' attempt to storm Sharif's house over the weekend.

During his speech in parliament, Hashmi criticised Sharif's policies but stopped short of calling on him to quit.

"For the last four months, I have been trying to control each and every individual in my party, I could see the situation," he said.

The army has denied it had anything to do with the protesters, saying it was entirely neutral and apolitical, but some in the government have long accused it of orchestrating the demonstrations to destabilise civilian rule.

Sharif, who was ousted in an army coup in 1999 during an earlier stint in office, has been at odds with the army since he swept to power last year in Pakistan's first democratic transition of power.

He has displeased the top brass by calling for better diplomatic and trade relations with India and Afghanistan as well as resisting the army's plan to mount an offensive against Islamist Taliban insurgents in Pakistan's northwest.

The treason trial of a former army chief and president, Pervez Musharraf, who launched the 1999 coup against Sharif, has also angered the military.

Anti-Sharif protests began to simmer in June when several of Qadri's activists were killed in clashes with police in the city of Lahore.

In Islamabad, its centre largely paralysed by the protests with many streets blocked off and businesses suffering losses, the atmosphere remained tense with police and troops protecting government buildings.

On Monday, hundreds of people storming and ransacked the state television headquarters, prompting the army to step in to clear and secure the building.