Pakistan plane with 152 on board crashes - UPDATE 3

A commercial Pakistani passenger plane with 152 people on board crashed in bad weather in hills near Islamabad on Wednesday. 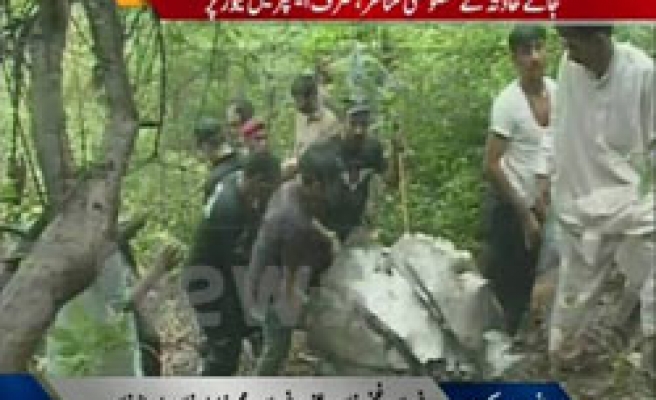 A commercial Pakistani passenger plane with 152 people on board crashed in bad weather in hills near Islamabad on Wednesday, and officials said there were so far no survivors.

At least 20 people were confirmed dead when the Airbus 321, belonging to private airline Airblue, crashed in heavy rain while flying from the southern port city of Karachi. Rescue efforts are continuing, officials said.

"So far, we have not found any survivors," Imtiaz Elahi, chairman of the state-run Capital Development Authority, a city municipal body, told Reuters.

He said earlier reports that five survivors had been pulled from the wreckage were wrong.

Rescuers said they had to dig through the rubble with their bare hands, with fire and thick smoke hampering their work. The crash site, on a steep and heavily wooded hill, has no roads, limiting access to pedestrians and helicopters.

"You find very few intact bodies. Basically, we are collecting bodies parts and putting them in bags," Bin Yameen, senior officer in the Islamabad police, told Reuters from the scene of the crash.

"I don't know what exact death toll but one can imagine how many could survive in such a bad situation.

"Bodies are being lifted through helicopters."

A thick blanket of cloud and smoke caused by fire could be seen rising from the crash site. A helicopter hovered overhead and flames licked at trees and what appeared to be wreckage from the plane, television pictures showed.

"We are removing wreckage with our hands. There is fire. There's smoke, which has made the rescue job very difficult," Bin Yameen said.

The crash site is on the Margalla Hills facing Islamabad, about 300 meters (yards) up the side of the hills. Smoke was visible from some districts of the city, and crowds of onlookers lined the streets pointing and watching the smoke rise from the green hills.

"It was raining. I saw the plane flying very low from the window of my office," witness Khadim Hussain said.

Pakistan's AAJ television showed rescue workers making their way on foot to the crash site with some difficulty. A young man was weeping and being embraced by another man.

The military said it had sent three helicopters to the site and troops had also been moved there.

Officials at the British and U.S. embassies in Islamabad said they were trying to confirm if any of their nationals had been onboard the crashed plane.

There had been heavy monsoon rains in the area for at least a couple of days.

Airblue began operations in 2004 with a fleet of Airbus A320 and A321 aircraft, according to its website www.airblue.com.

At Islamabad's international airport, passengers in the departure lounge scanned the television screens for news.