﻿The Muttahida Qaumi Movement has staged road blockages and enforced business closures in Pakistan's commercial capital in protest at the arrest of activists. 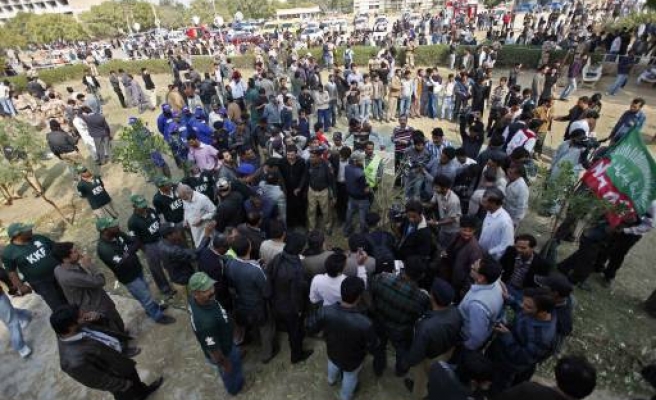 Thursday’s protests by supporters of the Muttahida Qaumi Movement against the arrest of party activists Wednesday night blocked all major roads linking the city’s five districts.

The protesters forced 70 percent of the city’s gas stations to close, disrupted traffic and cut-off the city center from the airport, causing the cancellation of several flights.

Problems caused for people getting around the city meant school and college exams were postponed and workplaces were half-empty.

Angry mobs forced the shopkeepers to shut in several parts of the city amid sporadic gunfire and burning road blockades.

The movement, a coalition partner of the ruling Pakistan People’s Party, mainly represents the Urdu-speaking population that migrated from India at the time of partition in 1947, known as Mohajirs or immigrants.

The demonstrators accused the paramilitary Rangers police unit in Karachi of arresting two dozen movement activists "without any reason," senior movement leader Haider Rizvi said. He added that the protests would continue until the "innocent" party members were released.

A Rangers spokesman rejected the allegation and said those detained were involved in firing on a police patrol, adding that political pressure would not secure their release.

State ministers belonging to the movement, the second largest political party in the province with 51 seats in the 167-member state assembly, left their offices in protest although they did not offer to resign.