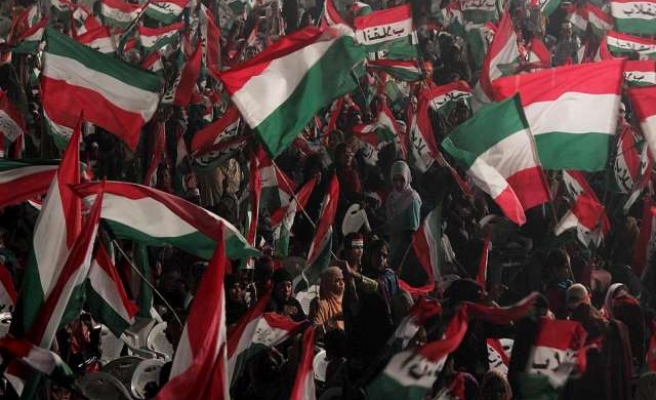 Pakistani anti-government protest leaders Imran Khan and Tahir-ul-Qadri have been charged under the anti-terrorism act, Islamabad police confirmed on Monday.

The two leaders are charged with damaging state property, inciting violence, attacking security forces, arson and rampage. Some other senior leaders from their parties have also been charged.

The two, who have formed a somewhat unusual alliance, began their protest on August 14 but it took a violent turn on Saturday, when some protesters attempted to advance towards Prime Minister Nawaz Sharif's home and clashed with police.

Khan's Pakistan Tehrik-e-Insaf has been calling for Sharif to resign over allegations of electoral fraud during the 2013 general elections, while Qadri's Pakistani Awami Tehrik has called more generally for a "revolution" in Pakistan.

Earlier Monday, the army had to remove protesters occupying the offices of state television channel PTV, where they were accused of attacking employees and damaging equipment.

In posts on their Twitter pages, both Khan and Qadri said they "disown" the attack on PTV and emphasized that they wanted the protests to be peaceful.

"PTI did not attack PTV and we totally disown this action. It damages our cause. We have always been peaceful & unarmed," Khan posted on his Twitter page. Qadri added that his party had instructed its supporters not to enter any government buildings.

Qadri had earlier claimed that his supporters now "control" the entrance to Sharif's house, which they had earlier been warned away from by the army.

There were also clashes between police and protesters who had occupied a government building that houses the offices of several ministries, with protesters throwing rocks and petrol bombs and police responding with teargas.

Hospital sources confirmed that 20 injured were brought to hospitals on Monday morning, including five policemen.

Pakistan's former military ruler General Pervez Musharraf called on Sharif to resign on Monday, saying his government "has been incapacitated and has lost the moral authority to govern."

"I must congratulate the people of Pakistan for achieving a major milestone through sheer grit, patience, perseverance, and determination. The will of the people is on the cusp of being established," the statement said. "It is now in the best national interest for Nawaz Sharif and [his brother] Shahbaz Sharif to move past their obstinate arrogance and respond to the pulse of the nation and resign. I see no other solution to bring an end to this political impasse."

Musharraf, who came to power in a bloodless coup that deposed Sharif in 1999, is facing four court cases for alleged crimes committed during while he was in power, including charges for high treason for imposing a state of emergency in 2007.

Musharraf's statement comes amid concern of an army intervention if the crisis is not resolved. It has already issued a statement urging a political resolution but some have accused the army of not doing enough to prevent protester violence.