Pakistani navy boats travelled through miles of flood waters on Sunday to rescue people stranded in a disaster. 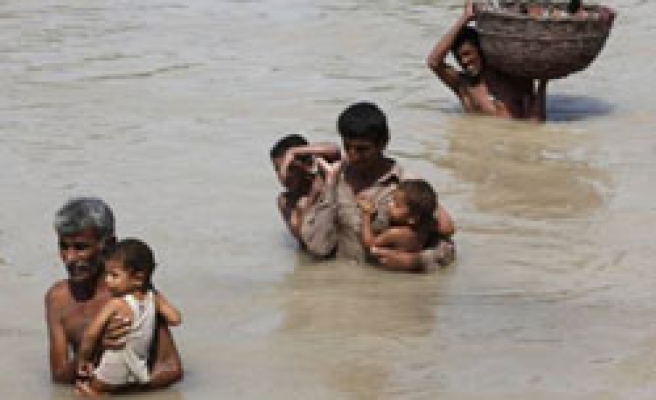 Pakistani navy boats travelled through miles of flood waters on Sunday to rescue people stranded in a disaster that has angered many over the government's response.

The military, which has maintained a dominant role in foreign and security policy even during civilian rule, is leading Pakistani relief efforts, as it has done in past crises like the 2005 earthquake.

Analysts do not expect the government's heavily criticised handling of the crisis to encourage the military, which has ruled for more than half of Pakistan's history, to try to seize power.

Heavy rain forecast to lash the country in the next 36 hours.

Rubber and wooden navy boats set out from areas in Sindh province, where flood waters burst from the Indus River across vast distances, to help Pakistanis who have watched safe ground shrink by the hour and waters swallow up their livestock.

"We have been doing this for several days," said navy officer Akhter Mahmood after his boat travelled through about 20 kilometres of flood water.

Women, chest-deep in water, carried chickens and clothes on their heads before entering navy boats. "I thought the waters would go away," said Sakina. "I want to come back."

Zardari drew fire for leaving the country for official visits in Europe during the crisis. He said the prime minister was handling the catastrophe and informing him of developments.

Floods wiped out Mohammad Saleem's home and grocery store in the village of Kot Addu. "We have not received any help from the government so far and I am sure any foreign help that will come will never reach us," he said.

Even though relief efforts may have improved the military's standing, and widened the perception that Pakistani civilian governments are too weak and inefficient to cope with disasters, analysts don't see any threat to the current administration.

"The current army leadership ... is very clear that there is a war that needs to be waged."

Floodwaters have roared down from the northwest to the agriculture heartland of Punjab and on to southern Sindh along a trail more than 1,000 km (600 miles) long.

"I would say shelter is the biggest concern at the moment. It is the most urgent," said Maurizio Giuliano, spokesman for the U.N. Office for the Coordination of Humanitarian Affairs. "People do need something on top their heads as soon as possible."

Hundreds of millions of dollars in humanitarian relief will be needed in coming months, he said. In the long term billions may be needed to rebuild infrastructure and restore livelihoods

In Punjab alone, 1.4 million acres of land was destroyed. The economy, which depends heavily on agriculture and foreign aid, has taken a major hit.

In some areas, only the tops of trees and telephone poles are visible. Pakistanis fighting to hold on to anything they can walk waist-deep in water carrying logs from their shattered homes.

Even before the floods, Pakistan was struggling to tame inflation that averaged 11.7 percent for the last fiscal year. In Swat Valley, one of the hardest hit areas, tomato prices have jumped from 40 rupees a kg to 140 since the floods hit.

"Our country has gone back several years," Prime Minister Yusuf Raza Gilani told reporters on a visit to Sindh province.

In Punjab, hundreds of people were evacuated from drenched areas to a railway track on higher ground.

"What we are wearing is all that we have, the rest is all gone -- our house, animals, wheat we had stored, everything has been destroyed," university student Fiza Batool said as she fed her 10-year-old sister biscuits.