A month after torrential monsoon rains triggered Pakistan's worst natural disaster on record, flood waters are starting to recede -- but there are countless survivors at risk of death from hunger and disease. 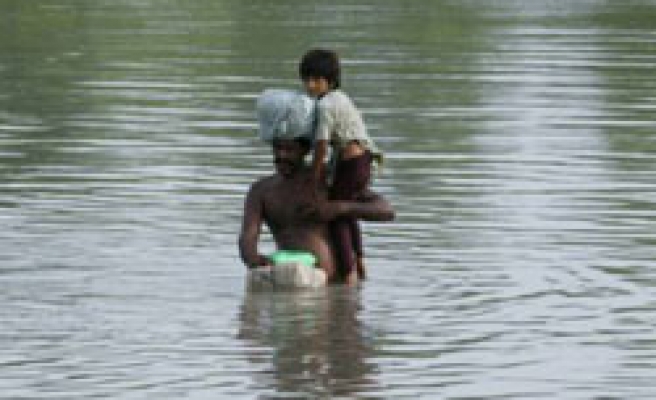 A month after torrential monsoon rains triggered Pakistan's worst natural disaster on record, flood waters are starting to recede -- but there are countless survivors at risk of death from hunger and disease.

The disaster has killed at least 1,643 people, forced more than six million from their homes, inflicted billions of dollars of damage to infrastructure and the vital agriculture sector and stirred anger against the U.S.-backed government which has struggled to cope.

Despite generally lower water levels, officials said they were still battling to save the delta town of Thatta, 70 km (45 miles) east of Karachi, in the southern province of Sindh.

Water has broken the banks of the Indus near Thatta and also topped a feeder canal running off the river.

"Thatta will be inundated if this water does not flow into the sea. The situation is very critical," Sindh relief commissioner Riaz Ahmed Soomro told Reuters. "We are trying to fill in breaches and strengthen embankments to save Thatta."

Soomro said about 95 percent of the delta town's 300,000 residents had already fled.

"Only male members of the families have stayed back to save their property. Children, women and old people, all of them have left Thatta."

The floods began in late July after torrential monsoon downpours over the upper Indus basin in northwest Pakistan. Officials said water levels were receding on most rivers and they expected no rain in the coming few days.

"We believe that it will take another 10 to 12 days for rivers in Sindh to come to normal flow. Therefore, we still need to be watchful," said Qamar-uz-Zaman Chaudhry, the government's top weather official.

The death toll was expected to rise significantly as the bodies of the many missing people are found. There is no official estimate of the number of missing because mass displacements have made accounting for them almost impossible.

The United Nations said aid workers were increasingly worried about disease and hunger -- especially among children -- in areas where even before the disaster acute malnutrition was high.

The receding floods have left behind huge pools of stagnant water, which in turn are breeding disease.

At an army-run clinic at a school in the village of Lasori Khar, hundreds of men, women and children queued up to see army doctors. Victims are suffering from skin disease, dysentery, depression and malaria.

"There are mosquitos all around. Children are getting sick because of malaria," said Zehra Mai, a woman from the village.

U.N. officials say an estimated 72,000 children, affected by severe malnutrition, were at high risk of dying.

Even before the floods, Pakistan's economy was fragile. Growth, forecast at 4.5 percent this fiscal year, is now predicted at anything between zero and 3 percent.

The floods have damaged at least 3.2 million hectares (7.9 million acres) -- about 14 percent of Pakistan's cultivated land -- according to the United Nation food agency.

The total cost in crop damages is believed to be about 245 billion rupees ($2.86 billion.)

In the nearby village of Jalal Wala, villagers began to return home to find their houses in rubble and their crops destroyed.

This was one of the worst affected villages, still only accessible by military jeep.

"I lost everything, there is nothing left," said Ellahi Bakhsh. "But thank God I managed to save my family and escaped. I don't know what will happen next."