Day after day, Afshan Bibi, a mother of 11, trudges to the U.N. distribution centre to get relief supplies to help her cope with the aftermath of Pakistan's floods. 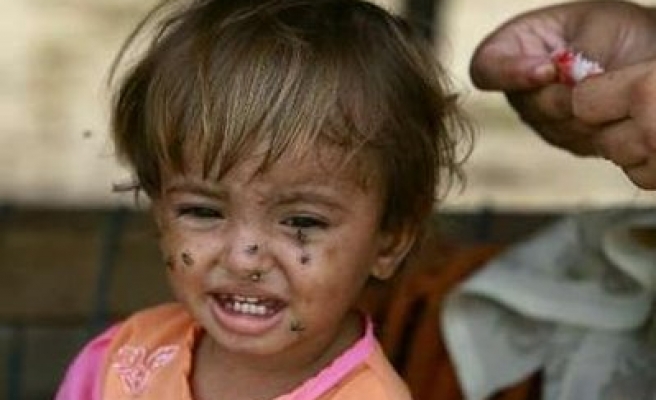 Day after day, Afshan Bibi, a mother of 11, trudges to the U.N. distribution centre to get relief supplies to help her cope with the aftermath of Pakistan's devastating floods.

A month later, housed in a tent encampment, she still comes away with nothing.

"I've come here every day for a whole month, but I haven't received anything," she said.

Only those producing a small paper token are entitled to any of the daily handouts at the sugar refinery housing the centre run by the U.N. High Commissioner for Refugees.

Bibi and others are told to come back tomorrow.

She is one of about 600 people -- mostly men -- from a nearby tent settlement who gather from 6 a.m. at the centre in the hope of getting blankets, mats, buckets, mosquito netting, soap or other supplies.

By noon, they are hot, frustrated and often angry.

Kifayat Ullah, a UNHCR official, pleads with them to calm down and queue up.

"For God's sake, make a line," he yells into the crowd. "Then you will be able to get something. Otherwise we will not be able to distribute anything."

Anger is fuelled by unrelenting misery one month after their lives were washed away by floodwaters.

Pakistan's northwest, the first region to be hit by the floods and the most devastated, now has roads lined with tents and tens of thousands of displaced waiting to go home.

Punjab and Sindh downstream may have suffered the most economic damage, but the northwest saw the most deaths and the most damage as the floods raged at their full fury, dropping out of the steep mountains overlooking this part of the country.

No one is sure of the exact number of displaced, but the United Nations estimates that more than 4.3 million people have been affected and more than 181,000 homes destroyed in Khyber-Pakhtunkhwa province alone.

Canvas or plastic, often ripped or patched, the tents are the only homes these people have a month after floodwaters reduced their homes to mud.

In the middle of a camp in the village of Nowshera housing more than 550 families, Saghi Gul sits outside his tent, absent-mindedly digging a small ditch with a rusty shovel. He and his wife, along with their six children, live in a small tent that he says was used to house victims of the 2005 earthquake.

In a sense, Gul and those living alongside him are the lucky ones. They get a tent.

But there is little privacy or cleanliness. Flies and mosquitoes dive bomb children's eyes and noses.

As his wife peers around a tent pole, a scarf pulled across her face, he recounts how his house in nearby Wabda village was "smashed" and washed away. His worldly possessions now amount to a small cot, a plastic water cooler and some blankets.

Gul complains that he and his children are suffering from diarrhoea and that only the international NGOs have decent doctors. The army is doing its best, but neither the civilian government nor Pakistani NGOs have done anything for him.

"We ask everyone in the international community: We just want to fix our houses. We want some help, and then we'll rebuild."