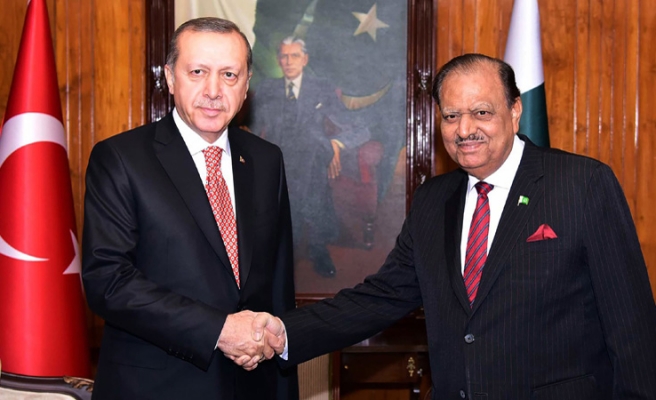 They agreed to further deepen the existing cooperation in trade and defence relations, settlement of Kashmir dispute in accordance with the UN resolutions, joint efforts for durable peace in Afghanistan and elimination of terrorism.

The two had one-on-one meeting which was followed by a delegation level meeting at the Presidency.

Mamnoon proposed to conclude a comprehensive and long-term "Framework Agreement for Defence Cooperation" between Pakistan and Turkey, which was agreed by the visiting dignitary.

He expressed satisfaction at Turkey's cooperation for its submarine upgrade and acquiring of Super Mashshak trainer aircraft from Pakistan by Turkey.

Erdogan said that bilateral defence cooperation between the two countries would grow further in the coming days, adding that in that regard all necessary measures would be taken.

The two leaders agreed that Kashmir dispute should be resolved in accordance with the resolutions of the United Nations. Expressing concern over human rights violations in Indian Occupied Kashmir, President Mamnoon Hussain called for an inquiry of these atrocities under the UN auspices.

He noted that bilateral trade between Pakistan and Turkey had declined during the last few years and emphasized the need to enhance it.

Agreeing to the suggestion, Erdogan stressed the need for joint ventures for enhancing bilateral trade and said soon there would be improvement in that regard.

Mamnoon hoped that Turkish investors would invest in Pakistan's energy and infrastructure sectors.

He expressed satisfaction over growing Turkish investment in Pakistan.