Heavily armed gunmen stormed the Bacha Khan university on January 20, killing teachers and students in a rampage that left 21 dead 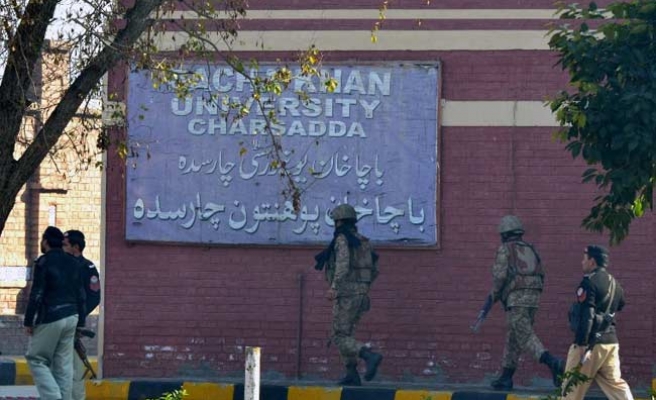 A Pakistani university attacked by the Taliban last month re-opened on Monday guarded by hundreds of police, highlighting a pervasive atmosphere of fear after the armed group vowed to continue to strike schools throughout the country.

Heavily armed gunmen stormed the Bacha Khan university in the northwestern town of Charsadda on January 20, killing teachers and students in a rampage that left 21 dead.

The attack shattered the sense of security growing in the troubled region a year after the Peshawar school massacre, in which more than 150 people -- mainly children -- were killed.

"I am very happy to announce that the university has been re-opened today but amid very strict security," the university's vice chancellor Fazal Rahim Marwat said.

He said the university was re-opened with an objective "to defeat the mindset of militants, which was behind the terrorist attack of January 20".

A sense of panic has gripped parents across Pakistan in the wake of the university assault, with rumours of attacks leading to closures of education institutions.

Last week, a government-run girls college for women in Rawalpindi evacuated hundreds of students following an exchange of gun-fire between police and car thieves nearby.

It followed a similar incident at a girls' high school in the central city of Faisalabad just weeks earlier.

At the university on Monday police and elite commandos were seen taking up positions over rooftops, while students were made to pass through body scanners and frisked before entering.

Marwat said the university had set up special camps for the psychological treatment of  traumatised students.

"We have come to the university today with a firm commitment to uphold sacrifices of our fellow students," said Rehmat Ullah, 20, a student of Bio-technology department.

Iftikhar Alam, a university professor, added: "We are starting classes today to make it clear to the world that we are ready to defeat our enemies and those who want to plunge Pakistan into darkness and illiteracy."

The university attack was claimed by the Taliban, with commander Khalifa Umar Mansoor calling schools "nurseries" for people who challenge Allah's law.

Flanked by armed extremists wearing masks, he said that instead of targeting professional soldiers, "we will target the nurseries that produce these people".

Pakistan has been fighting a homegrown insurgency since 2004, when militants displaced by the US-led invasion of Afghanistan began a campaign against Pakistani forces in the country's border tribal areas.

Overall levels of violence have fallen since a concerted military push against the Taliban's bases that began in 2014.

Last year saw the fewest number of civilian and security forces casualties to militant attacks since 2007 -- the year the umbrella Pakistani Taliban group was formed -- though the threat of attacks, particularly on "soft targets" like schools, remains.