Following a meeting at the White House, Pakistani PM Sharif reiterates Pakistan’s firm resolve to not allow any 'ISIL footprint in Pakistan' 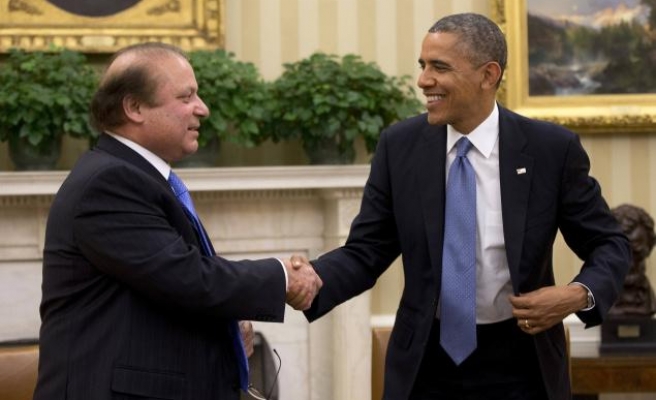 Pakistan and the U.S. have expressed the resolve to continue working together to counter emerging threats such as ISIL in South Asia.

According to a joint statement released from the White House Thursday, Sharif and Obama made the resolve after holding wide-ranging discussions on Thursday, including counterterrorism and defense cooperation.

Having met at the White House, both leaders renewed their common resolve to promote peace and stability throughout the region and to counter all forms of extremism and terrorism, according to the written statement.

"Highlighting the quickly evolving extremist landscape from the Sahel to South Asia, the president and prime minister noted with satisfaction that the U.S. and Pakistan are working closely to counter emerging terrorist groups such as the ISIL in South Asia," it said.

Sharif reiterated Pakistan’s firm resolve not to allow any "ISIL footprint in Pakistan".

Besides, Obama and Sharif have also expressed their commitment to advance the Afghan owned and led peace and reconciliation process between the Afghan government and the Afghan Taliban.

The president commended Pakistan for hosting and facilitating the first public talks between the Afghan government and the Taliban in July 2015. He also highlighted the opportunity presented by Pakistan’s willingness to facilitate a reconciliation process that would help end insurgent violence in Afghanistan.

In turn, Sharif thanked the U.S. for its support in bolstering Pakistan’s counter-terrorism capacity.

Both leaders called on Taliban leaders to enter into direct talks with Kabul and work toward a sustainable peace settlement.

Obama and Sharif also highlighted that improvement in Pakistan-India bilateral relations would greatly enhance prospects for lasting peace and stability in the region.

"The leaders emphasized the importance of a sustained and resilient dialogue process between the two neighbors aimed at resolving all outstanding territorial and other disputes, including Kashmir, through peaceful means and working together to address mutual concerns of India and Pakistan regarding terrorism," the statement said.

Sharif's second visit to Washington since his election in 2013 came days after Obama announced to keep 9,800 U.S. troops in Afghanistan beyond 2016 after the Afghan city of Kunduz was captured by Taliban fighters last month.

Pakistan has long been dependent on the U.S. in terms of its military and financial needs. In recent years, however, Islamabad has drastically shifted its focus to longtime ally China and former enemy Russia.

In July, Islamabad signed a $46 billion "Pak-China Economic Corridor" agreement with Beijing. And last week, it inked a $2 billion agreement with Russia for the construction of a 1,000-kilometer pipeline linking southern Karachi city to northeastern Lahore city.

In September, Islamabad also signed a defense deal with Moscow for the procurement of a number of MI-17 helicopters.