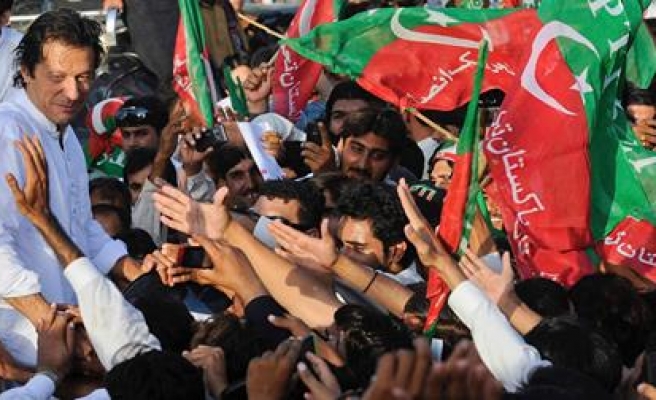 A Pakistani court on Wednesday issued arrest warrants for cricketer-turned-politician Imran Khan, firebrand preacher Tahi Qadri and several others for storming the parliament and seizing the state-owned television station during a sit-in protest in August, according to court documents.

The warrants have also been issued for Chief Minister of northwestern Khyber Pakhtunkhawa (KP) province, which is ruled by Imran Khan's Pakistan Tehrik-e-Insaf (PTI), Makhdoom Shah Mehmood Qureshi, and several other parliamentarians and leaders on the same charges.

Khan has been staging a sit-in protest in front of the parliament with his supporters for nearly three months against alleged fraud in the May 2013 elections that brought Nawaz Sharif to power.

He had set off his long march on capital Islamabad on August 14, and teamed up with Qadri the next day in front of the parliament.

The situation rapidly degenerated as protesters occupied a state-owned television station for hours and stormed the parliament. Five protesters were killed, and over 500, including 100 police officers, were injured in clashes.

The sit-in protest- one of lengthiest in the country’s checkered political history- lost momentum when Qadri abruptly ended his participation in the protests last month and left the country. Khan party holds 33 seats in the 342-member national assembly.

He has already threatened to gather "people from across Pakistan" in Islamabad on November 30 "to oust the government" if his demands are not met. Qadri, who returned from Canada in December 2012 after a six-year self-imposed exile, allegedly abandonned Khan for a “handsome” deal with the government.

He, however, denies any deal with Sharif's government. Qadri is currently in the United States to collect donations for his Pakistan Awami Tehrik (PAT) party.