Pakistani fishermen are helping scour the flooded countryside of the southern province of Sindh for people running out of food. 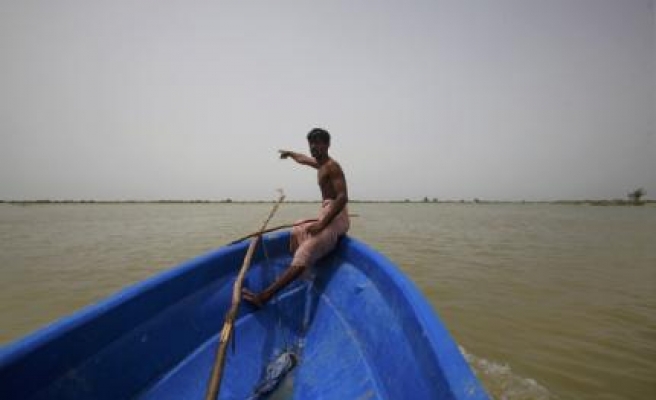 Pakistani fishermen are helping scour the flooded countryside of the southern province of Sindh for people marooned in the deluge and now running out of food.

More than three weeks after torrential monsoon rains fell over the upper Indus river basin, many people across Sindh's flat rice belt in the province's northwest remain cut off in their flooded homes.

The rains triggered Pakistan's worst natural disaster in terms of the amount of damage and number of people affected.

But many ignored government warnings to leave as the flood swept down the Indus, doubting the scale of the inundation and determined to look after farms and precious animals.

But their food is running out.

"There are a lot of people still stranded," said boatman Muzaffar as he set off into the flood near the town of Shahdadkot, 70 km (43 miles) west of Sukkur, in a 20-foot (6-metre) boat powered by an outboard motor.

Muzaffar and his two crewmen are fishermen, at home on the inland waters of Sindh, where they make their living.

They are members of the Fisher Folk Forum, a group that helps fishermen and has supplied two boats to help with the disaster.

Muzaffar said he and his colleagues had rescued several hundred people from flooded villages near Shahdadkot over the last three days and were now venturing deeper into outlying areas to look for survivors.

Muzaffar took his boat several km (miles) across a large expanse of water and then began threading it through gaps in roads and embankments gushing with water, along flooded irrigation canals and over submerged rice fields.

Snakes and lizards swam through the water looking for dry ground while white herons hunted on the waterline.

One of the crewmen, Ahmed Ali, sat in the bow with a pole, checking the depth when passing over flooded roads and banks, occasionally leaping out to push the boat away from shallows.

"We can't control the water. Where it gives us a way, we go," said Ali.

Farm buildings jutted up from the floodwaters. Others, built on patches of higher ground, were deserted, no one answering the boatmen's calls.

A young man on the boat was trying to find his village where several members of his family and others were marooned.

But the man lost his bearings in the countryside with its landmarks submerged.

After a couple of fruitless hours and with fuel running low, Muzaffar said it was time to turn around and pick up some people he had passed earlier who had tried to wave down the boat from an embankment about a foot (30 cm) above the water.

Among them was Sharifa, who said she had not eaten for six days.

She and the four others, including her young daughter, left four buffalo and several cows on their strip of barren, sun-baked land, with only a lean-to made out of branches for shelter.

"We were the last ones to look after the animals, but now we're hungry so we have to leave them," Sharifa said after gulping some water as the boat took them to Shahdadkot.

She said if she could find some food, she would try to take a boat back to look after the animals.

Muzaffar and his crew are volunteers, happy to help until they can go back to fishing.

"Money is nothing, you get it, you lose, it but it's good to save people" said Ali.