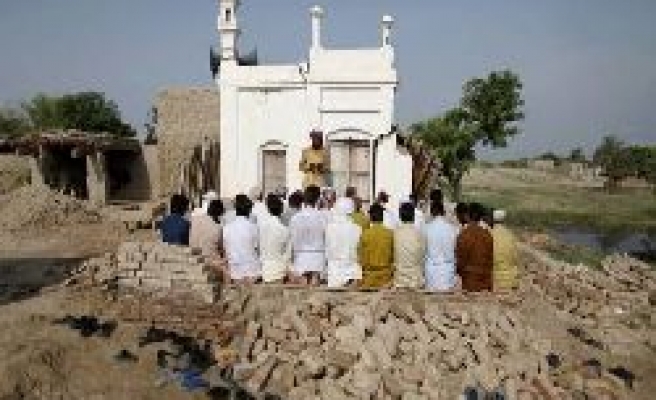 Pakistani flood victims finds little to celebrate during Eid Al-Fitr as they came together and pray outside the damaged mosques in their flooded villages.

Having offered Eid prayers on Saturday in a tiny, shattered mosque, Mohammad Sadiq is firmer in his faith and determined to rebuild his life and home devastated by Pakistan's worst floods in memory.

A labourer in his early 30s, Sadiq looks at the calamity that affected lives of over 20 millions people as God's wrath to punish for "wrong-doings", but he is certain the blessings of the Muslim fasting month of Ramadan would bring new happiness.

"We have lost everything in the floods - our home, livestock and all our belongings - but we are alive today to celebrate Eid-ul-Fitr," he said.

"We should be thankful to God for this."

Almost one-eighth of the population, 21 million people affected by the worst floods in living memory and broad swaths of the country still under water, many have no homes to go to, and no mosques to attend.

As Sadiq spoke, nearly two dozens of his neighbours embraced each other to exchange greetings outside the mosque that was among the thousands of mud and brick-made structures damaged or destroyed in floods in Mehmood Kot in central Punjab.

"We are confident that good days will return soon," said Abdul Jabbar, a shopkeeper, who offered prayers in the same mosque.

Starting nearly six weeks ago, Pakistan's worst ever floods killed more than 1,750 people and inflicted nearly $43 billion worth of damage to infrastructure and agriculture, the mainstay of the economy.

The floodwaters are receding in many part of Pakistan, but millions of people are still living in camps, their houses destroyed and livelihoods lost.

The European Union appears likely to grant trade concessions worth hundreds of millions of euros to flood-hit Pakistan, diplomats said on Friday.

"Eid is for those who have everything. For us, away from our home and living like beggars in this makeshift camp, it means nothing," said Mukhtar Ahmed, standing outside a roadside relief settlement in Sukkur in Sindh.

"The government has done nothing to help us," he said, echoing a growing frustration among people becoming increasingly weary of the slow government response.

His is a common refrain, and sounds a bitter note for a holiday that is traditionally about home, family and faith.

Turkey endorsed end of the holy month Ramadan, Eid Al-Fitr on Thursday and Eid al-Fitr started in Saudi Arabia, Africa and North America on Friday, September 10, but some countries such as Pakistan celebrates the day on Saturday.

Eid al-Fitr celebrates the purification achieved by holy Ramadan and is marked by several days of festivities.

Up to 3.5 million children could be in danger of contracting deadly diseases carried through contaminated water and insects, the United Nations has said.

But back in Mehmood Kot, those worries were for another day. Children played and enjoyed the festivities, mostly arranged by NGOs.

"I don't know who gave this to us but I have new clothes, bangles and also some money as an Eid gift," said a beaming Ayesha, as some other children swarmed a nearby balloon-seller.

Ramadan is a fasting month for Muslims who realize the one-month period as an opportunity for inward-looking, purification of the soul and the body, enhancing social relations and promoting assistance to the poor.

Every physically and mentally able adult Muslim is obliged to perform the absolute dawn-to-dusk abstinence from food and drink, and sex.