Taliban spokesperson Shahidullah Shahid said in a press release on Tuesday that the three-member committee comprising Maulana Sami-ul-Haq, Professor Ibrahim Khan, and Maulana Abdul Aziz had the full blessing of the Taliban leadership to go ahead with peace talks. 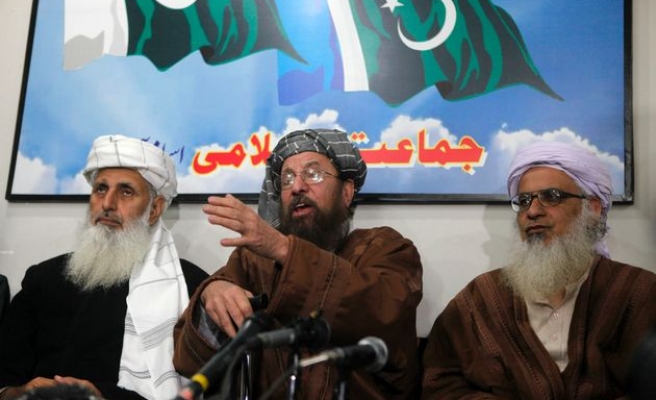 Pakistan's government and a three-member Tehrik-e-Taliban Pakistan (TTP) committee agreed to an immediate ceasefire during the first meeting between the two sides about the possibility of starting a peace process, on Thursday.

They also discussed the potential of negotiating within the framework of the existing constitution, a condition which the Taliban have always previously refused to accept.

An official announcement regarding the ceasefire is likely to be made by both sides in the coming days but a Taliban source told Anadolu Agency, on the condition of anonymity, that the committee will attempt to convince the TTP leadership to accept the conditions.

The Coordinator of the three-member Taliban committee, Maulana Yousaf Shah told reporters: "We will meet the Taliban leadership within a day or two to discuss the decisions [of the meeting], and we are hopeful that we will come back with a good news," Maulana Yousaf Shah.

Maulana Sami-ul-Haq, the head of the Taliban team, read the joint communiqué prepared by the two teams and noted that the two sides met in a cordial atmosphere.

"There are some positive developments," said Sami, while appealing to the nation to pray for the success of the peace talks.

According to the joint communiqué, the government side sought the scope and authority of the TTP negotiators with reference of a ten-member Taliban Political Shura (consultative body) that is monitoring the peace process.

On the other hand, the Taliban committee sought the authority of the government team and demanded a meeting with: Prime Minister Nawaz Sharif; Army Chief Raheel Sharif; and Head of the Inter Service Intelligence (ISI) Lt. General Zaheer-ul-Islam, for further clarity on the peace process which is viewed sceptically by many in Pakistan.

The government committee comprising also demanded that the scope of the peace talks should be limited to the militancy-affected areas.

Taliban spokesperson Shahidullah Shahid said in a press release on Tuesday that the three-member committee comprising Maulana Sami-ul-Haq, Professor Ibrahim Khan, and Maulana Abdul Aziz had the full blessing of the Taliban leadership to go ahead with peace talks.

Prime Minister Sharif has made the ending of the Taliban insurgency, which started in 2007, a priority since taking office in August 2013. Initial progress was halted when a US drone strike killed Taliban leader Hakimullah Mehsud in November 2013. They responded with a campaign of retributory attacks against Pakistani security forces that have killed around 45 and injured more than 100 since Mehsud's death.