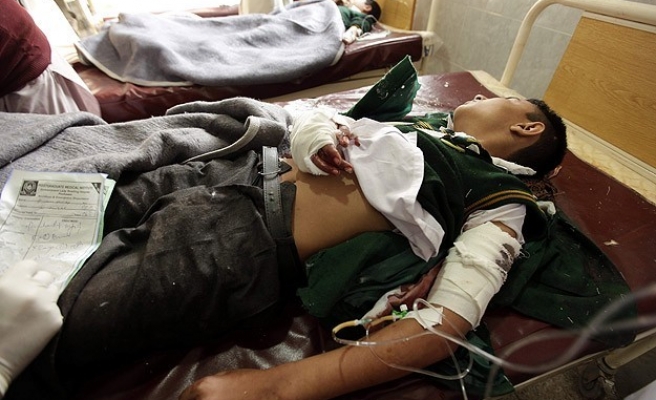 World Bulletin / News Desk
Teachers in a Pakistani province will be allowed to carry licensed firearms in schools as a result of a new government move on Tuesday in the aftermath of the killing of more than 100 students at a school in December.

The move by the government of northwestern Khyber Pakthunkhwa province -- where the Taliban attacked an army-run school in provincial capital Peshawar -- was intended to allow teachers to "engage terrorists" while waiting for security forces to respond.

The move, confirmed by state Information Minister Mushtaq Ghani, is seen by some as putting children at greater risk of attack.

The state government has also begun issuing arms licenses to schools to bolster security across the province, which adjoins Pakistan's militancy-plagued tribal belt and borders Afghanistan.

So far, some 40 schools, mainly in Peshawar, have been issued with arms licenses while hundreds more are awaiting them, state officials said.

Officials said arms licenses were being issued only to private schools for the hiring of private security guards, in line with security guidelines issued by the government.

Psychologists and teachers oppose the state government's move, saying it will not only put the students in danger but also affect the teachers' performance.

“This is most stupid idea vis-a-vis security of educational institutions, I have ever seen,” said Dr. Shahid Iqbal, the head of the Department of Psychology at Urdu University Karachi. “One does not have to be genius to figure out the psychological impact on a student who knows that he is being taught by an armed person. He will feel threatened and insecure.”

He feared that an argument between an armed teacher and students, especially in a college or the university, could lead to another tragedy.

“This is a well-known fact that the people of KP province are more stressed and scared than people of any other province because of a long spell of terrorism there. In these circumstances, a panicked or distressed teacher may take any unpleasant and undesirable action,” he speculated.

“Giving the benefit of doubt to the government, which has been under mounting pressure from the masses and media, I believe it will be a short-term plan because it cannot work for a longer period,” said Gilani. “A teacher’s job is not to engage himself in security related issues but to teach students. Students of colleges or universities may not feel threatened by an armed teacher but definitely it will have highly negative impact on school children.”

Gilani suggested that instead of putting the burden of security on teachers, the government should re-allocate government funds to increased law-enforcement personnel and help schools to improve security measures.

"I hope sanity will prevail and the government will reverse this decision,” he said.