Only a quarter of the $459 million aid needed for initial relief has arrived according to the UN, as the first case of cholera reported 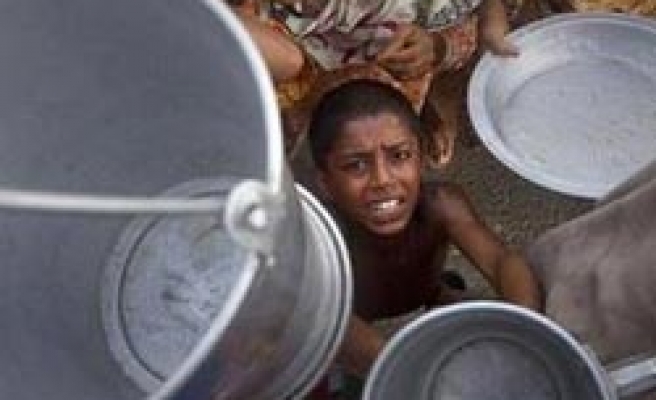 Pakistani flood victims, burning straw and waving sticks, blocked a highway on Monday to demand government help as aid agencies warned relief was too slow to arrive for millions without clean water, food and homes.

Public anger has grown in the two weeks of floods, highlighting potential political troubles for an unpopular government overwhelmed by a disaster that has disrupted the lives of at least a tenth of its 170 million people.

Hundreds of villages across Pakistan in an area roughly the size of Italy have been marooned, highways have been cut in half and thousands of homeless people have been forced to set up tarapaulin tents along the side of roads.

But aid has failed to keep pace with the rising river waters.

"The speed with which the situation is deteriorating is frightening," Neva Khan, Oxfam's country director in Pakistan, said in a statement.

"Communities desperately need clean water, latrines and hygiene supplies, but the resources currently available cover only a fraction of what is required."

Dozens of stick-wielding men and a few women tried to block five lanes of traffic outside Sukkur, a major town in the southern province of Sindh. Villagers set fire to straw and threatened to hit approaching cars with sticks.

"We left our homes with nothing and now we're here with no clothes, no food and our children are living beside the road," said protester Gul Hasan, clutching a large stick.

Hasan, like fellow protesters, has been forced from his village and sought refuge in Sukkur. He and others were camped under tattered plastic in muddy wasteland beside the road.

On Sunday night, hundreds of villagers burnt tyres and chanted "down with the government" in Punjab province.
"We are dying of hunger here. No one has showed up to comfort us," said Hafiz Shabbir, a protester in Kot Addu.

"Only a quarter of aid arrives"

The damage caused by the floods and the cost of recovery could bring long-term economic pain to Pakistan and shave more than one percentage point off economic growth, analysts say.

Pakistani stocks ended down 2.9 percent on fears the impact on growth may be more damaging than estimated after Sunday's warnings.

Up to 1,600 people have been killed, two million made homeless in Pakistan's worst floods in decades.

Only a quarter of the $459 million aid needed for initial relief has arrived, according to the United Nations. That contrasts with the United States giving at least $1 billion in military aid last year to its regional ally.

Authorities forecast on Monday a brief respite in rains.

Water levels in the Indus River feeding Pakistan's plains have fallen in Punjab, the country's most populous and worst hit province, although flooding would stay high where embankments were breached. In Sindh province, flooding could get worse.

"In Punjab, the water level in the river is falling and in the next 4-5 days ... there will be scattered rains, but they are not flood-producing," Qamar-uz-Zaman Chaudhry, director general of the meteorological department, told Reuters.

On Sunday, U.N. Secretary-General Ban Ki-moon urged donors on to quicken up aid and Prime Minister Yusuf Raza Gilani warned of a second and third wave of floods.

Despite a possible break in heavy rains, many families had little hope of returning to their homes.

"We only hear that the water is receding but there is still more and more water in our village," said Mansha Bozdar, 45, whose village borders the Sanawan town in southern Punjab.

"It seems if it will never stop."

The U.N. has reported the first case of cholera amid fears that disease outbreaks.

"As humanitarians we certainly are on high alert because we have to be able to be prepared for any kind of development," said U.N. spokesman Maurizio Giuliano. "We don't know which way it's going to go. More flooding is certainly possible."

In Sukkur, hundreds of people set up camp along a sliver of dry land between the swollen Indus and a low concrete wall by a road running alongside the river.

But their sanctuary has been getting ever narrower as the river rises. On Monday, the muddy bank was just a few feet wide in some places and the water was still coming up.

"Where can we go?" asked Faiz Mohammad as he squatted on the concrete wall. "Everywhere is flooded."