Pakistanis desperate to get out of flooded villages threw themselves at helicopters on Saturday. 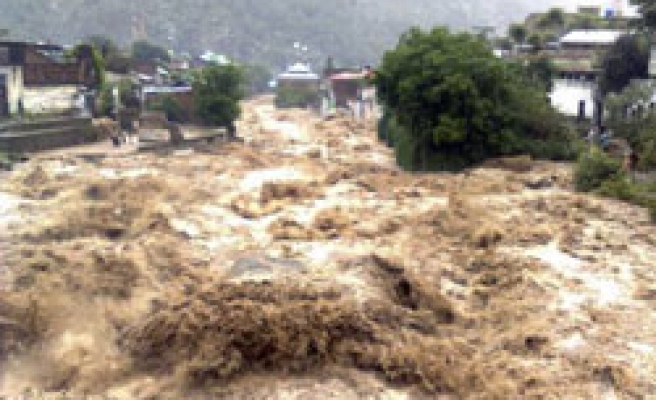 Pakistanis desperate to get out of flooded villages threw themselves at helicopters on Saturday as more heavy rain was expected to intensify both suffering and anger with the government.

The disaster has killed more than 1,600 people and disrupted the lives of 12 million. Pakistan's agriculture-based economy, heavily dependent on foreign aid, has suffered a major blow.

Heavy rains are expected to lash the country again raising the prospect that more houses and crops will be swept away.

In the town of Muzaffargarh, near where rivers bloated with rain from as far away as Afghanistan and India merge with the Indus to flow south to the sea, army helicopters dropped packets of rice to people who had moved to higher ground to a cemetery.

Some latched on to helicopter skids as the aircraft took off. An elderly man fought his way inside one. He looked down and wept.

Districts in southern Sindh province were on high alert on Saturday as the water surged down the Indus river basin.

After a dike burst in a village in Sindh, authorities ordered people to leave and soliders started evacuations, said a district official. Authorities said up to a million people in the province have been evacuated.

Floods have roared down from the north to the agricultural heartland of Punjab to Sindh along a trail more than 1,000 km (620 miles) long.

Sindh is home to Pakistan's biggest city and commercial hub, Karachi, but the floods are expected to hit rural areas.

U.N. officials said more than half a million people had been evacuated in Sindh.

Flooding was also taking a toll over the border in Jammu and Kashmir, where rain was hampering rescue and relief efforts. Flash floods have killed at least 132 people in the Himalayan region of Ladakh.

Responding to criticism of his absence, President Asif Ali Zardari said the prime minister was capable of dealing with the crisis.

On Saturday, the president was to address Britain's Pakistani community after talks with Prime Minister David Cameron.

"Our president is out visiting foreign countries while we drown here. The government is doing nothing," said flood victim Anar Gul in northwestern Pakistan.

"Just look at our condition. We have no drinking water, nothing to eat, nothing. We are sitting in the rain. We have no tents. We are not getting anything from anywhere."

Pakistan's government was already under pressure to tackle a range of problems.

Although Zardari this year handed most of his powers to Prime Minister Yusuf Raza Gilani, he still wields influence, and his departure to Europe as parts of Pakistan were submerged further eroded faith in the civilian government.

The military, with which Zardari has had differences, has ruled Pakistan for more than half of its history. It has spearheaded relief efforts, reinforcing the view that civilian governments cannot handle major crises.

But analysts do not expect the army to make a grab for power.

The army remains too preoccupied with US-backed offensives against Taliban insurgents to try and orchestrate a takeover. The military would rather play a behind the scenes role and let the government take the heat for Pakistan's failures.

"Our houses have been fully submerged. I kept putting my kid's toys in higher places in my house to protect them from water," said Rana Abdul Razzak, an engineer at a power station where flood victims had taken refuge.

"But I lost everything. I cannot tell you how bad it was to see those toys floating in the water."