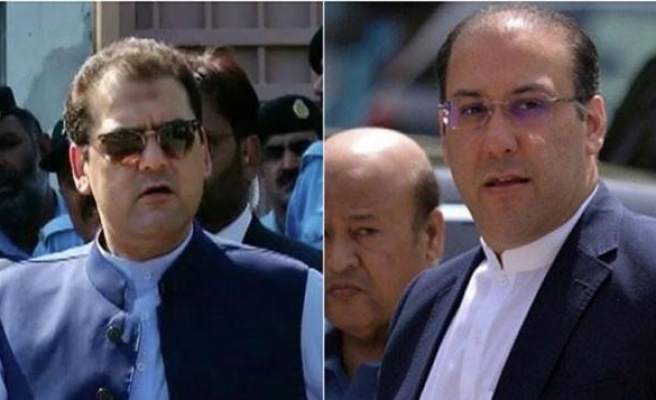 Two sons of former premier Nawaz Sharif have been declared absconders in multiple corruption cases for their failure to appear before a court in Islamabad on Wednesday, local media reported.
Hassan Nawaz and Hussain Nawaz, who are co-accused in three corruption cases against their father, were formally declared absconders after expiry of a month-long deadline set by the anti-corruption court for them.
The ruling Pakistan Muslim League (Nawaz group) has already said that Hassan and Hussain, who are British nationals, will not appear before the court as Pakistan's laws do not apply on them.
Judge Mohammad Bashir, who is also trying Sharif, his daughter and son-in-law in the same corruption cases stemming from the Panama Papers scandal, however rejected the contention, and declared the two absconders, local Geo News reported.
Sharif along with his daughter Maryam Nawaz and her husband Muhammad Safdar left the court hours before the judge announced the verdict.
The former premier’s family has time and again rejected the allegations and told the court “all corruption charges are based on lies”.
Strict security arrangements were observed inside and outside the judicial complex and the ruling party’s workers were barred to enter the court premises.
Supreme Court of Pakistan ousted the former premier from the office on July 28 in Panama Papers case. The court found that Sharif had acted in an untrustworthy manner by failing to declare a salary from his son’s Dubai-based company ahead of the 2013 election.
The apex court had also ordered the country’s anti-corruption watchdog National Accountability Bureau (NAB) to open several cases against him, his children, son-in-law and Finance Minister Ishaq Dar.
According to evidence submitted by the National Accountability Bureau, Sharif family owns four posh London apartments, two steel mills in Saudi Arabia and several offshore companies in the United Kingdom.
The April 2016 Panama Papers revealed that three of Sharif’s children owned offshore assets not shown on his family's wealth statement, including luxury apartments in London.
Last Mod: 15 Kasım 2017, 12:06
Add Comment